?Chelsea are weighing up a free transfer swoop for Juventus’ Kwadwo Asamoah after missing out on his club teammate Alex Sandro.

The ?Sun has reported that Blues boss Antonio Conte wishes to bring the Ghana international to the Premier League and utilise his talents at left wing-back.

Conte was the man behind Asamoah’s switch to Juventus back in 2012 and the Italian may look to be reunited with the 26-year-old if he decides to stay on at Stamford Bridge past this summer. 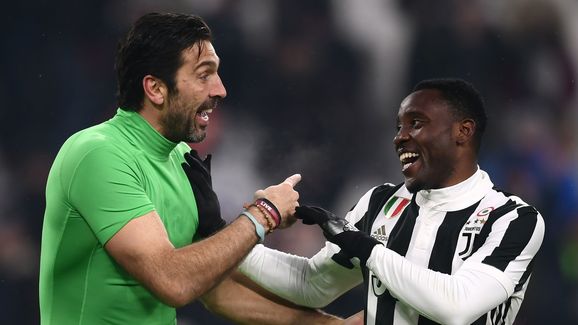 Asamoah was expected to play back up to Sandro at full-back in I Bianconeri’s team but he has forced his way into the reckoning this term after the Brazilian became unsettled by interest from Chelsea last July.

Sandro was expected to complete a £60m move to west London as Conte eyed competition for Marcos Alonso in his preferred 3-4-3 system, but the ex-Santos man remained in Turin and has since expressed his interest in remaining at Juventus for the long term.

That has led Chelsea to rethink their plans ahead of the summer transfer window opening, and they have averted their gaze in the direction of Asamoah as a result.

Napoli and Inter Milan also harbour interest in prising Asamoah away from the Allianz stadium but it is thought that he wants to play in England rather than switching allegiance to a different Serie A club.

All of this depends on Conte’s future, however. The 47-year-old has hit out at his club’s board on numerous occasions this term as he queries how ambitious they are and whether they back him to sign who he wants in the transfer market.

Coupled with Conte admitting earlier in the summer that he may want to return to his homeland in the near future, speculation has been rife about his time at Chelsea coming to an end despite Roman Abramovich not looking to sack the gaffer who brought Premier League title success back to the club.