Cesc Fabregas’ 50th Premier League goal gave Chelsea hope for a top four finish, as Swansea failed to put further distance between themselves and the relegation battle with a 0-1 loss in South Wales, leaving them just a point away from 18th-placed Southampton.

With results elsewhere in the Premier League putting the pressure on the home side, Carlos Carvalhal had to upset the odds to ease the pressure on his team, as we approach the finale of throes of the season.

Despite seeing much of the ball in the opening two minutes, 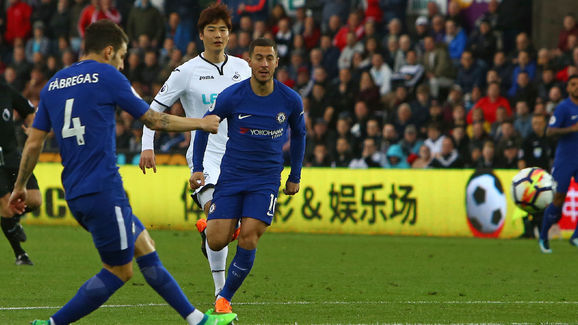 As the Spaniard gave Chelsea the lead inside three minutes, Swansea failed to retaliate, and the chances continued to fall to those in blue.

Oliver Giroud was inches away from turning in from a corner to make it two, while Fabregas almost doubled his tally after stylish link-up play with Hazard once again.

Carvahal’s men struggled to retain the ball and get out of their own half, as the pressure continued to mount throughout the half. Chelsea almost doubled their lead through an unlikely source as Swans defender Alfie Mawson miscued an attempted clearance towards his own goal. However, to the relief of his supporters, the ball narrowly missed. As the game approached half-time, Antonio Conte’s men made their possession and control look easy, as the Blue’s effortlessly strolled around the pitch with the ball at their feet. Swansea’s willingness and urgency looked pitiful for a team fighting relegation, and the sides went in at the break with Chelsea in full control.

As the rain started to come down on the players in South Wales, it became a simple rinse and repeat for Chelsea at the start of the second-half, as the travelling side continued from where they left off.

Hazard started to enjoy himself more and more against the Welsh side, linking up with Giroud and Fabregas to force some last-ditch defending from the home team. 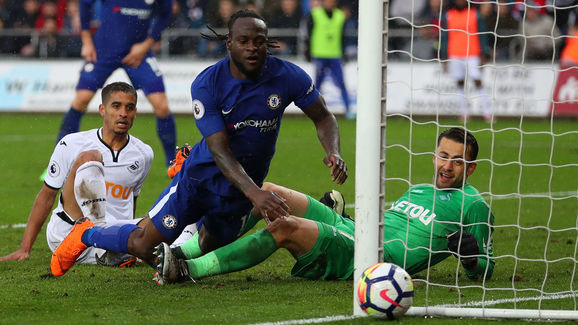 The subdued atmosphere at the Liberty Stadium began to match that of the slow performance from Swansea, as it looked ever more likely that Chelsea were going to ease to the finish line with three points.

As Carvalhal began to make changes, Nathan Dyer and Tom Carroll entered the fray to add pace and tenacity to the home side. The Swansea boss’ substitution’s almost worked immediately, as Dyer had efforts blocked by Gary Cahill and saved by Thibaut Courtois, while Carroll began to influence the attacking line when his side started to move forward. After 70 minutes of a subdued atmosphere, and lack of urgency from Swansea the relegation-fighters finally came into the game, with Carvalhal’s changes making a big difference to the game and the decibel levels.

Crosses from out wide began to trouble Chelsea slightly. However, as time was running out, and the class of Cahill and Courtois started to show, and Swansea’s late resurgence in the match could not force the Chelsea defence to break.

With just minutes left to play, the Swansea belief looked strong, and the home side continued to threaten, but Chelsea would not budge. After such a dull first half performance from Swansea, in the final moments of the game the Swans began to fight.

However, despite the late attempts from the hosts, their efforts came too little and too late, as Chelsea’s experience shone through to see them over the finish line.

Swansea’s loss leaves them just a point outside the drop-zone following Southampton’s win in the south coast derby, while Chelsea are now just two points off Tottenham in fourth, as Conte’s men continue to fight for a Champions League spot.