There were many aggravating things about Chelsea’s Carabao Cup final loss on pena?lties to Manchester City on Sunday – particularly that it got to penalties at all, after the Blues had done more than enough to win the game – but the Kepa Arrizabalaga saga is certainly the most glaring.

Because, aside from all the obvious grievances surrounding mutiny, disrespect, petulance etc, it also distracted from the steady narrative of a Maurizio Sarri resurgence that had been building up in the 90 minutes or so prior to the incident.

This was a game where Sarri, a fortnight on from that harrowing, humiliating 6-0 loss at the Etihad Stadium, bounced back. For a man who’s been regularly lambasted for his tactical rigidity and all-round stubbornness, he showed, just like he did back in December (remember when he was a tactical genius?) that he could deploy a pragmatic approach. 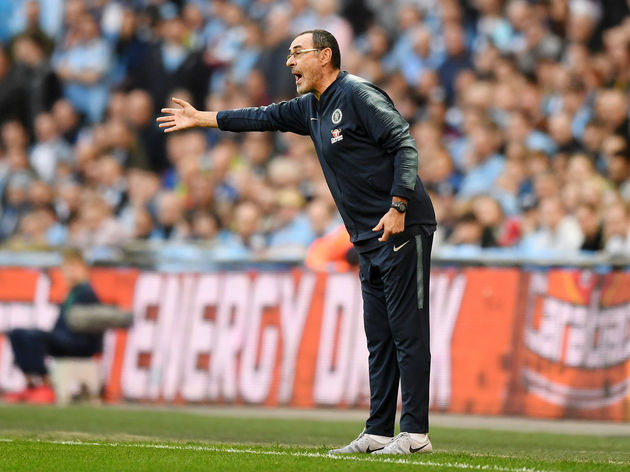 Of course, it might not seem like rocket science to batten down the hatches in the opening half hour of a game against an opponent that had smashed four past you in 25 minutes two weeks prior, but still, he learned from his mistakes.

That said, the levels of commitment and fight Blues players showed on that surprisingly sun-drenched Wembley pitch shouldn’t be glossed over. In my eyes, the players in royal blue played with a desire and passion that went beyond ‘oh this is a big game so I’ll try.’

There seemed to be a genuine wish to rebuild their own dignities and that of their manager. After being adjudged to have cast shade on Sarri’s excessive tactical teachings in the lead up to the game, no one embodied this newfound spirit more than Antonio Rudiger – who was uncompromisingly, and imperatively, bullish throughout.

Equally impressive was Emerson Palmieri, who deliver exactly the kind of performance that Marcos Alonso has time and again showed he is incapable of – basically, having any remote impact in defence whilst maintaining an attacking presence. And, as a fan inside the stadium on Sunday, I can tell you the joy at seeing first Callum Hudson-Odoi, and then ?Ruben Loftus-Cheek come on, instead of the preposterously dull Mateo Kovacic for Barkley (and vice-versa) or Willian/Pedro revolving door – avoided this time because both of them started – was unbridled.

To reiterate, all of this, combined with the genuine (and I don’t think unfounded) belief that Sarri was doing a number on Pep Guardiola was doing wonders for his, and thus the club’s, stability, was reinvigorating.

Then Kepa said ‘hold my beer’, or, in this case, ‘hold up the fourth official’s board with my number on it’, and the entire narrative was washed away. After two minutes of inane childishness, and a degree of miscommunication and confusion, Sarri was prompted to walk halfway back to the dressing room before checking himself, realising there was still his first cup final to win.

But it was too late. The symbolism was too strong. The writing was on the wall: ‘SARRI WALKS AWAY FROM THE FIELD, AND MAYBE THE JOB, IN DISGUST’. ‘IT’S THE BEGINNING, EVEN THE END, OF THE END’. ‘ANOTHER CHELSEA MANAGER BITES THE DUST, AGAIN TOPPLED BY HIS OWN PLAYERS’.

The systemic and ugly history of player empowerment persisting at ?Chelsea for the last 10 years had finally, and very publicly, come to a head. It had bubbled to the surface beyond repair.

Why, then, does the title of this piece claim that this situation should actually strengthen Sarri’s position at Stamford Bridge? Well, to start with, should is the key word in that sentence. Many things should be done, but it is rare that they actually are.

For what it’s worth, though, this should simply lend Maurizio Sarri a helping hand in his fight to stay on in west London. Because, if the board can’t recognise the unsustainable, and thus unmanageable levels of power the players have acquired at Chelsea thanks to their ceaseless model of managerial instability, and thus see the sense in finally backing someone other than them for once, then, frankly, what’s the point?

It was Sarri, not Kepa, who had guided the Blues up to that point, in what was the team’s best performance this season, despite the result. In my eyes, it was an even better execution of the game plan used at Stamford Bridge, with City gaining far less clear-cut chances, and Chelsea having more.

As Pep Guardiola alluded to in the post-match press conferences, it was the best N’Golo Kante and Jorginho have played alongside each other in the same game, the best defensive fortitude the rearguard has shown and the best resilience shown all-round since the 60-year-old took to the job. Of course, the irony of this current incarnation of player power is that there are so few leaders present in this squad. The continued will-he-won’t-he leadership saga surrounding ?Eden Hazard, a man who wouldn’t be charged with being a leader in most other Premier League squads, in the same way that, say, Sergio Aguero isn’t a leader per se, proves this.

This leadership gulf is why Sarri now deserves the time and resources to build some stability. It is he who should be entrusted with this task, not the same players under a different tactical roof. There’s only so many times you can replace your entire roof only for it to be continuously broken in exactly the same fashion before you realise that thing breaking it may need to be fixed rather than the whole roof.

If this board have any sense of introspection, they might figure this out. But, as history shows, that’s asking a lot.