?Chelsea boss Maurizio Sarri has insisted that ‘things have gone well’ as he continues to impose his new philosophy during his first season in charge at Stamford Bridge.

Having started the season strongly after arriving in west London from Napoli last summer, Sarri has seen his methods heavily criticised during the second half of the season, with accusations that the Italian often lacks a ‘plan B’ and some Chelsea fans recently calling for him to leave.

However, the Blues have regained their place in the top four of the Premier League heading into Sunday’s clash with ?Liverpool and remain in the hunt for Europa League success, and Sarri told ?Sky Sports: “Considering everything, I think so far that things have gone well.

“We are trying to put a new philosophy in place. We have a lot of young players that are growing. We are winning games and are in the Europa League and in the fight for the Champions League.

“Considering we are all still settling in the league, things have been good for us. We knew from the beginning there were teams that were ahead with their work, some had been working for two or three years on their projects, working with the same team. 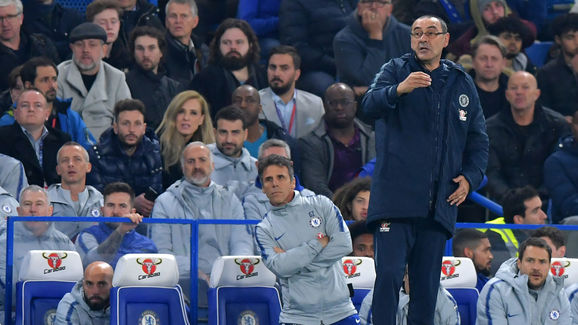 “It was a difficult challenge to be competing with them for the league, but we tried at the beginning and started very well. Then we had a setback.

“But we learned from that and are still progressing and have faith with the work we are putting in place. We didn’t change our philosophy.

“The difficulty has been training because if you want to grow you have to train. But in a league when you play all the time – we’ve played 33 games and still have a lot to play – there is no time and space for training the way we want to train.

“That’s the most difficult thing. You have to adapt your timing to get the players training the way you want in really limited time.”

?Chelsea head into Sunday’s clash with title-chasing Liverpool in strong form, having won each of their last four games in all competitions, following Thursday’s 1-0 victory away to Slavia Prague in the Europa League.

“We have to continue our good form,” Sarri added. “It’s a pity we come to play a game like this with only two days to prepare, Liverpool had two more, but that’s the way it is.

“It’s a disadvantage for us but we are going to do our best, as always. We respect the rivalry between the supporters and the club but what’s important for us is the three points for the league.”