?Chelsea welcome Burnley to Stamford Bridge on Monday night, with the Blues looking to bounce back from the defeat to Liverpool in the Premier League last week.

Progression to the Europa League semi-final should have lifted the spirits of Chelsea fans on Thursday, but a poor second half performance against Slavia Prague has only raised more questions for (and around) Maurizio Sarri.

?Antonio Rudiger is unavailable as he recovers from a knee injury sustained at Anfield, with Andreas Christensen in line to continue alongside ?David Luiz in the centre of defence. ?Eden Hazard is expected to play through the pain caused by the tough tackling Prague side, giving Sarri a near full squad to choose from.

Check out how Sarri could line up his side for ?Monday’s clash against the Clarets. Kepa Arrizabalaga (GK) – Beaten by three long-range strikers in the last two games – although whether the Spaniard was at fault for any of them is up for debate.

Cesar Azpilicueta (RB) – ?Azpilicueta has missed just two Premier League games for Chelsea since the beginning of the 2015/16 season, and should get the start in this one.

David Luiz (CB) – Luiz will need his head screwed on against two tricky ?Burnley customers on Monday – particularly Ashley Barnes, who has been known to cause problems against Chelsea.

Andreas Christensen (CB) – The academy graduate has made just four league starts this season, with his game time mostly limited to the Europa League. 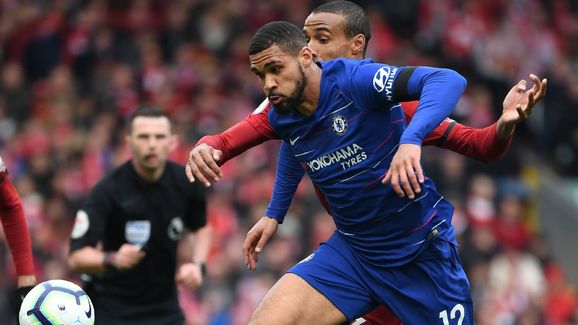 Jorginho (DM) – Rested in midweek for ?Mateo Kovacic, Jorginho had one of his best games in a Chelsea shirt at Turf Moor in October, but his form quickly spiralled thereafter.

N’Golo Kante (CM) – Given a rare Europa League start on Thursday, but ?Kante is immune to fatigue and will take the field on Monday for the 49th time this season.

Ruben Loftus-Cheek (CM) – ?Loftus-Cheek is by far Chelsea’s most productive midfielder with eight goals and four assists, despite playing over 1,000 minutes less than both Kovacic and ?Ross Barkley. Callum Hudson-Odoi (RW) – Only made a late cameo on Thursday, the 19-year-old has recently played his way into the starting lineup in the Premier League – starting three consecutive matches.

Olivier Giroud (ST) – With no Europa League game in the immediate future, Sarri should have no choice but to play his best and most in-form striker who has five goals and three assists in his last eight appearances.

Eden Hazard (LW) – ?Hazard was named among the nominees for the PFA Player of the Year award this week – his fifth PFA nomination in seven seasons. The Belgian is one goal away from 20 in all competitions.