?Chelsea travel to Germany to take on Eintracht Frankfurt for the first leg of their Europa League semi-final tie on Thursday.

At the quarter final stage, the Blues made hard work of Slavia Prague in the second leg after leading 4-1 at half-time. Two Prague goals after the break made for a nervy last half hour at Stamford Bridge but Maurizio Sarri’s side saw the game out and secured their place in the last four. Eintracht impressively overturned a two-goal deficit against Benfica to reach the semi-final after losing the first leg 4-2 in Portugal. The Bundesliga side did exactly what was required in the return leg in Germany and ground out a 2-0 victory to progress on away goals.

Against a stern defence and one of Europe’s hottest properties in the shape of Luka Jovic, Chelsea fans can expect a tough contest on Thursday, as they look to move one step closer to securing Champions League football next season. Chelsea suffered a big blow in Sunday’s 1-1 draw with ?Manchester United, as defender ?Antonio Rudiger suffered another knee injury that has ruled him out for the season.

?Willian was also forced off at Old Trafford following a dangerous challenge by ?Marcos Rojo, handing ?Pedro an opportunity to build on his two goals in the quarter final against Slavia Prague.

Eintracht will be without Croatian forward and key player Ante Rebic, who misses out through suspension after picking up a yellow card in both legs of their quarter final against Benfica.

Midfielder Mijat Gacinovic missed their weekend draw with Hertha Berlin with a muscular complaint but the Serbian, who has five assists this Europa League campaign, is expected to be fit for Chelsea’s visit.

The sides have never met in a competitive fixture, with their only previous meeting being a pre-season friendly in 2010. Frank Lampard scored for the Blues but the German side ran out 2-1 winners. 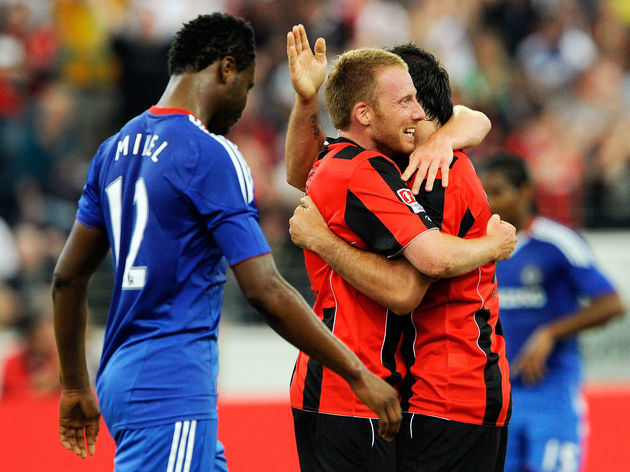 Eintracht haven’t faced Premier League opposition since 2006/07, when they faced ?Newcastle United in the group stage of this competition (formerly the UEFA Cup) – the match ended goalless.

A strong of poor performances, including a disappointing draw at home to ?Burnley, has bizarrely left Chelsea in a stronger position in the Premier League table. Sarri’s side are two points clear in fourth place with two games remaining, but their recent form suggests there could still be a twist in the tale.

The quality of the football in the 2nd half shows exactly why both these sides are struggling to make top 4. #MUNCHE

The Blues are without a win in three in the league but Chelsea have been pretty impressive in the Europa League, as they remain unbeaten with 11 wins from 12.

Oddly enough, Eintracht’s recent domestic form is identical to Chelsea’s – the Eagles have drawn two and lost one of their previous three games – and much like the visitors, they are clinging on to fourth place for Champions League qualification. The Blues will need to show a vast improvement on their recent performances if they wish to take a positive result back to Stamford Bridge for next week’s return leg.

Chelsea have cruised through the Europa League this season but Eintracht will be Sarri’s toughest test to date.