Referee Tom Henning Ovrebo has opened up for the first time about his part in the infamous Champions League semi-final second leg between Barcelona and Chelsea at Stamford Bridge.

?Barça eventually snuck through to the final (and went on to complete a historic treble) after Andres Iniesta’s equalising strike into the top-right corner late on, but the game was marred by several controversial incidents involving the referee.

Ovrebo waved away numerous seemingly stonewall penalty claims for the home side, whilst also botching a number of red card calls.

His performance provoked ?Chelsea striker Didier Drogba to utter the now infamous words ‘It’s a disgrace, it’s a f*cking disgrace’ at the cameras upon the final whistle, and the referee has become something of a villain for Blues fans since.

Mow Ovrebo has finally had the chance to tell his side of the story. Panenka

“When I arrived at the dressing room, I thought, ‘Okay, Tom Henning, this has not been your best night, keep calm.’

Indeed, throughout it all, his goal was ‘to stay calm, not to stoke the fire anymore.’ 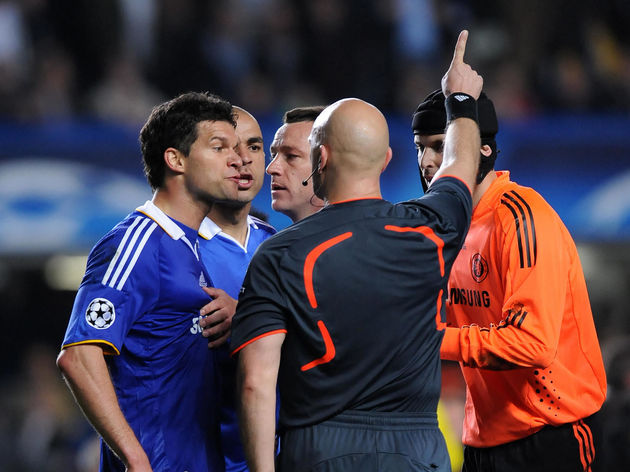 But this became impossible when the game reached a fever pitch, and this would irrevocably change his life, as he revealed: “I have to admit that I was boiling inside, it was in the locker room that I realised how controversial everything had been … In the space of two hours, I went from being a fairly respected referee to becoming the fool, the biggest in international football.”

Ovrebo also revealed the extent of the security required in the aftermath of the game: “They put us in police escort until we could get a plane and return home.”

Death threats followed, though the Norwegian was surprisingly understanding in his assessment adding: “They came more from the frustration of not winning that game and my performance in it, than from the real desire to kill me and my family.” Finally, he revealed the reasons behind his silence until now, confessing that UEFA coerced him into not speaking publicly.

“First, they wanted the investigation into the game to end, they did not want any comments in the press that could exacerbate the situation,” he recalled. “It would have been very good to have been able to express publicly everything I felt about it.”