?Arsenal will take on Chelsea on Wednesday evening in the Europa League final, a game which has been somewhat overshadowed by the controversy surrounding where it is to be played.

The Baku showpiece is not only the Gunners’ chance at a first European trophy in 25 years, but also their final opportunity to play Champions League football next season.

?Chelsea meanwhile could win their third major European title since 2012, but may be the farewell match for manager Maurizio Sarri and star player Eden Hazard.

The clash in Azerbaijan will be the 198th fixture between the two London clubs, and it’s a fixture that has produced some wonderful moments of the years. This was early on in Arsene Wenger’s first full season in charge at Highbury, and Gunners fans knew they had a special side to finally challenge Manchester United’s reign of dominance.

However, when Gus Poyet and Gianfranco Zola cancelled out Dennis Bergkamp’s superb brace, Arsenal needed to find a winner to keep the pressure on Sir Alex Ferguson’s side.

Thankfully for them, that winner came from an unlikely source, as left-back Nigel Winterburn hit a 30-yard thunderbolt to win the game in the 89th minute, after Frank Leboeuf was sent off for the Blues. Following goals from Dan Petrescu and Tore Andre Flo, and with only 15 minutes to play, the Gunners looked down and out.

That was until an extraordinary performance from Nigerian forward Nwankwo Kanu, who scored an incredible hat-trick to single-handedly drag Wenger’s side to a memorable win at the Bridge.

The winner was particularly special, as after he rounded the goalkeeper, he somehow found the net from the tightest of angles to give Arsenal a dramatic 3-2 win. 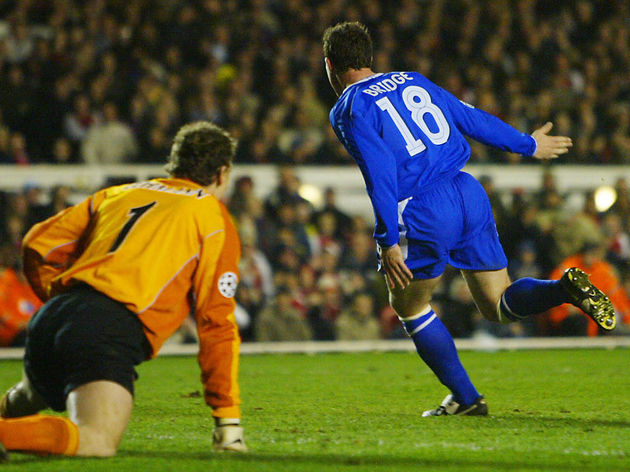 After a 1-1 draw at Stamford Bridge in the first leg of their Champions League quarter-final, the stage was set for Arsenal – who were about to become the first English side to complete a top flight season unbeaten – to progress to the last four at the expense of one of their greatest rivals.

However, Claudio Ranieri’s side had other ideas, even after a first half Jose Antonio Reyes goal made progression to the semi finals near impossible.

A Frank Lampard goal would level the score in the second half, before Eidur Gudjohnsen set up Wayne Bridge to bag a late winner and put to bed a pulsating encounter, and give the Blues their first win over Arsenal in 17 games. This match is probably more famous for an injury and subsequent mass brawl more than the result.

A 17-year-old Theo Walcott put the Gunners ahead early on, before a Didier Drogba double gave Jose Mourinho’s men the victory in the League Cup final – the last to be held at the Millennium Stadium in Cardiff.

The drama was far from over though, as captain John Terry was taken to hospital after Abou Diaby kick him in the head, before a fight saw red cards for Jon Obi Mikel, Kolo Toure and Emmanuel Adebayor. A Robin van Persie hat-trick was the inspiration for what was a famous win for Arsenal at Stamford Bridge.

But a late Terry slip gifted Van Persie a second, before the Dutchman completed to his hat-trick in injury time to give his side a famous victory; scoring his 28th goal in 27 games. ?A bizarre case of mistaken identity dominated the headlines after this clash, after Kieran Gibbs was shown a red card despite Alex Oxlade-Chamberlain punching the ball off the line to stop a certain Chelsea goal.

The visitors never recovered from that, as Chelsea ran riot in Arsene Wenger’s 1000th game as Arsenal manager.