?The Premier League is full of some of the world’s best players: Harry Kane, Kevin de Bruyne, Sadio Mane to name just a few. However, one of the great beauties of this league is the young players who emerge and stamp their authority for the rest of the world to sit up and take notice.

Here are some potential breakout stars for the upcoming Premier League campaign. The 20-year-old wonderkid is highly rated by manager Frank Lampard – who also took him under his wing at Derby. With a transfer ban and a lack of real creative talent at ?Chelsea, there is no doubt that Mason Mount will have his chance to make a real impact.

Impressive in the Championship last season, Mount scored eight goals and got five assists in the league, and in general was a constant thorn in the side of opposition defenders. There is no doubt that he will be a player to watch next season. Despite playing in the same position as new signing Nicolas Pepe, Reiss Nelson will be hoping to get his fair share of first-team opportunities as an ?Arsenal player. The youngster is capable of playing on either wing and is exactly the type of player the Gunners were crying out for last season.

Nelson spent last season on loan at Hoffenheim, scoring seven goals in the Bundesliga and demonstrating what a threat he can be with his direct running and pace. The Gunners have an exciting prospect on their hands. 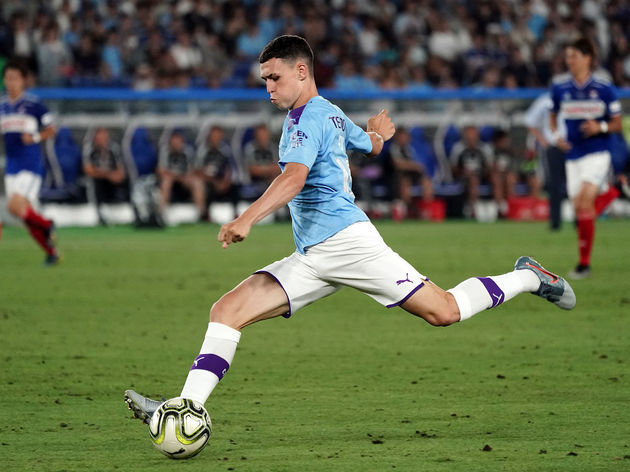 Described by Pep Guardiola as the most talented player he’s ever managed, (believe that if you will) ?Foden is seen as the answer to England’s prayers in the number 10 department.

The 19-year-old struggled for game time last season, but towards the end of the campaign he began to find himself in the team more often. One stand-out moment included a diving header running in from the edge of the box.

Going into the 2019/20 season, ?Manchester City and even England fans will hope to see Foden come of age. Another one of Arsenal’s young stars, Joe Willock has had a brilliant pre-season, forcing himself into the thoughts of Unai Emery. The 19-year-old shone in games against European heavyweights Bayern Munich and Real Madrid, carrying the ball through experienced opposition midfield with relative ease.

Despite making only six first-team appearances last season, Willock will be confident that he is able to build on that and play significantly more games. Mason Greenwood is ?a ?Manchester United fan favourite and they are desperate for the 17-year-old to get his shot in the squad. The striker has been brilliant in pre-season, performing with great pace and vigour – a real live wire.

Greenwood performed brilliantly last season too for the Under-18s, with 26 goals and eight assists in all competitions. He even played in United’s final game of the season and was arguably their man of the match.

With Lukaku likely to leave, Greenwood will be hoping that he will be able to rack up some more first-team appearances next season. ?Bournemouth love taking a punt on young Championship players, and Lloyd Kelly is another example of that. Signed for a large amount of money for someone from England’s second division, the spotlight will be on the 20-year-old defender who was also linked with Liverpool.

A cool, calm character who is capable of playing at left back and centre back, Kelly will be hopeful of establishing himself as one of England’s best up-and-comers at Bournemouth, with Harry Maguire the template to follow. Oliver Skipp would have been very pleased with his end to the season, making 12 appearances towards and performing rather tidily in them.

A combative midfielder with a good engine, he likes to do the simple things. The 18-year-old was also very assured when tucking away a penalty in the Audi Cup final against Bayern.

Despite the arrival of Ndombele, Skipp will be confident of the fact that Pochettino will give him a lot of opportunities in a ?Tottenham shirt. Rhian Brewster’s first-team introduction at ?Liverpool has been a long time coming, with the Under-17 World Cup winner tipped for great things before a bad injury ruled him out of the vast majority of the 2018/19 season.

However, still only 19, ?Jurgen Klopp has talked up the young star’s potential, with the former Chelsea youth starlet likely to step into the role of backup centre forward to Roberto Firmino following Daniel Sturridge’s summer exit.

Brewster has a great goalscoring track record at youth level and also landed the Golden Boot at the 2017 Under-17 World Cup. In the Reds’ pre-season travels, he picked up four strikes whetting fans’ appetites for the campaign to come.