Both clubs have jumped ahead of reigning WSL champions Arsenal in recent weeks and look increasingly likely to scrap it out between themselves to decide where the trophy will be heading.

Second place Chelsea, who remain the only unbeaten team in the league, have won each of their last five WSL game since a shock draw against struggling Liverpool in mid-December.

That has included 8-0 and 6-1 wins over West Ham and Bristol City respectively, as well as a statement 4-1 annihilation of Arsenal last month. 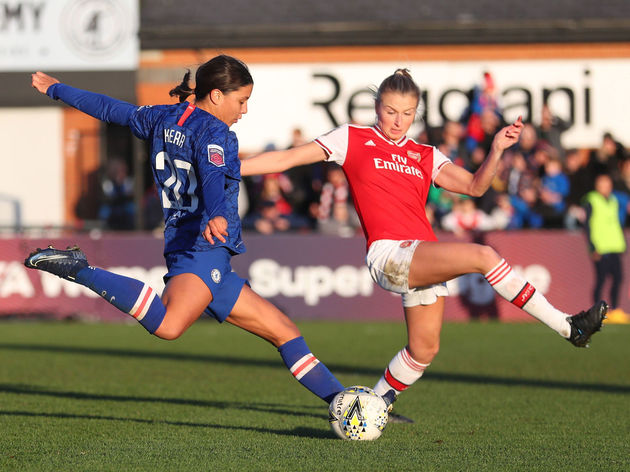 Leaders City, meanwhile, are on an even better run of late and have won six WSL games in a row since losing 2-1 against Chelsea in the reverse of this weekend’s fixture in early December – Chelsea goals from Bethany England and Maren Mjelde turned the game around late on.

City too have beaten Arsenal in their run of victories, doing so earlier this month in what was manager Nick Cushing’s last game before taking up a post at New York City in MLS.

With only a point currently separating City from Emma Hayes’ Chelsea, who also have a game in hand, a victory for either side in Sunday’s game at the Academy Stadium in Manchester could be hugely significant as the 2019/20 title race heads towards the final stretch.

A win for City, now led by Cushing’s former assistant and ex-Burnley midfielder Alan Mahon, would open a four-point gap that Chelsea’s game in hand alone couldn’t close. But if Chelsea can win, they would go two points clear at the top instead, all the while still with that game in hand.

Aside from a run of six successive WSL wins, City are also on a run of 11 consecutive WSL home wins, which is a record in the competition. They haven’t failed to win at home in the league so far this season and haven’t dropped points since last February – when they faced Chelsea. That game in Manchester a year ago was a 2-2 draw when a Ji So-yun brace for Chelsea in the second half cancelled out earlier City strikes from Georgia Stanway and Tessa Wullaert.

Chelsea have also never previously beaten City away in the WSL in six previous attempts.

Right now, Chelsea have taken 34 points from the last 36 on offer, which is better than anyone else in the WSL, City included. Bethany England has also scored in eight consecutive WSL games after netting against Birmingham last time out, which set a new league record. But will either side actually win on Sunday?

Of the last five WSL meetings between these two clubs, four have actually ended in a draw, with the only victory going to Chelsea in the aforementioned reverse fixture earlier this season.

How to Watch on TV

To watch the action, tune into BT Sport 2 on Sunday 23 February for a 2pm kick-off. Alternatively, audio commentary is available for free on the FA Player app.