?Manchester United want to lure Willian to Old Trafford as the Chelsea ace eyes contract talks with his current club.

The ?Sun has reported that a source close to the United camp has insisted that Jose Mourinho wishes to be reunited with the winger, who he managed during his second spell in charge at Stamford Bridge.

The Red Devils tried to poach the 29-year-old last summer but the reigning Premier League champions were not willing to part with the forward, despite fears that the Brazil international wouldn’t be a regular starter under Antonio Conte this term. 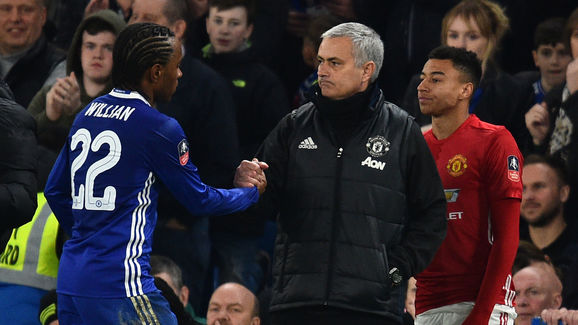 That has not put United off in their pursuit of the £60m-rated forward, and the source hinted that Mourinho would chance his hand again in trying to convince Chelsea to sell their wide man in the close season.

The source remarked: “Jose is still interested in him. The club had a sniff last year but Matic was the only possibility. He does not have long left on his contract. The boss is a huge fan of his, he is always pull of praise.

“God knows where this leaves the rest of the wide players at the club but it cannot be good for them. He is a fantastic trainer with a great attitude towards his football according to Jose.”

Chelsea fans are always so quick to say the players surrounding Hazard have let him down. Willian and Kante have stepped up more than he has over two legs.

(You may also be interested in ?Collision Course: Mourinho ‘Targeting Four Signings’ As Man Utd Board Scoff at Transfer War Chest Plea)

Mourinho has apparently sent scouts to Chelsea games to keep tabs on Willian’s form and fitness ahead of offering up a decent bag of cash for his services.

The ex-Shakhtar Donetsk star found his best form under the Portuguese gaffer during the latter’s second time in charge in west London, but has struggled to overhaul the likes of Eden Hazard and Pedro in Conte’s starting lineup for much of this season.

Please who agrees with me that Willian should join Man Utd ??????

However, Willian’s camp are believed to have held tentative talks with Chelsea’s hierarchy about extending his stay in the capital despite United’s interest.

It would seem that his agent is trying to eek out more money for his client and himself while interest in Willian’s signature is hot, but Chelsea have offered no indication over their potential plans to offer Willian fresh terms.