Chelsea defender Marcos Alonso has said his side would be in the top four if they replicated ?their performance against Barcelona on a regular basis.

The Spanish defender, who has flourished in his left wing back role over the last two seasons, told the ?Independent that his side need to learn from their defeat to La Liga leaders Barcelona. “I think there’s been a lot of positives, a lot of positive things in both games against Barcelona and I think we have to show this desire in the next games and make sure that we win every game.

“I think we showed until the last minute that we can play against any team and now we have eight finals and we have to make sure we play Champions League next year.”

Alonso admitted that several factors have contributed to Chelsea having a poor season, but knows his team will fight to finish in the top four and to secure FA Cup glory.

“[This season is] difficult, so many games, so many games this year and we have not got the deepest squad, maybe, new players this year, I don’t know, we can only look forward and start fighting for fourth spot in the Champions League and to win the FA Cup.”

“That’s difficult,” Alonso said, when asked if the top four and FA Cup glory would constitute a successful season for Antonio Conte’s men. “It’s what we have left and at the minute we can only fight for this and learn from the defeats that we’ve had this season and next season will be another season.

“It is what it is, we have to start fighting these last eight games because I think we deserve to play this competition again next year.”

The defender took time to reflect on the Barcelona game, and highlighted the positives that his team could take from the performance as they head into the closing stages of the season. 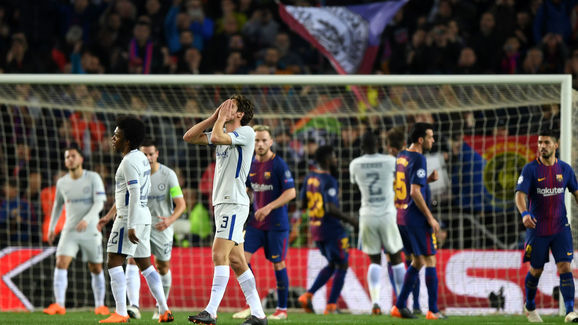 “We played a very good game but we conceded too much, the first two goals were maybe too easy against a team like Barcelona but we had so many chances,” he said. “I think we showed great character, we played good games both in the second leg and in the first leg and maybe the score is too much but it’s fair because they put the ball in and we didn’t.

“[Courtois] was just unlucky, if it happened again 10 times then he [Messi] doesn’t score because Thibaut is a great goalkeeper and I think it was just an unlucky action. But even if they had scored those goals, if we had scored our chances, I think we had 10 or 12 chances, hit the post twice first in the first leg, once in the second, it’s also very unlucky.”