Chelsea progressed to the semi finals of the FA Cup after a thrilling extra time victory away at Leicester.

The Blues initially took the lead through Álvaro Morata towards the end of the first half, as he received a through-ball from Willian and curled past Schmeichel.

Vardy equalised from close range to take the game to extra time, but a Pedro header sealed Chelsea’s progression and denied Leicester their first FA Cup semi final for 36 years. 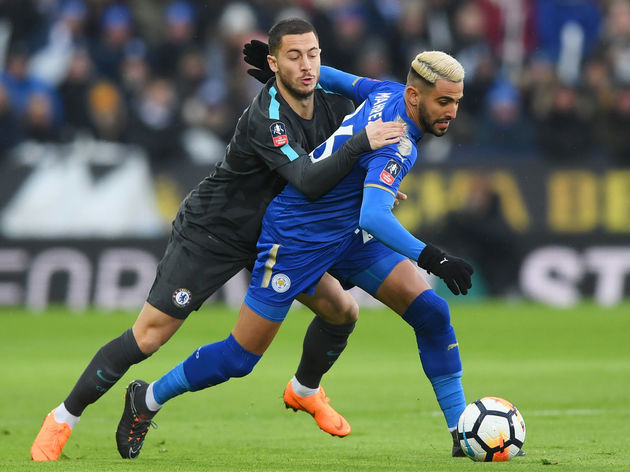 ?The game started brightly, with Leicester immediately getting themselves on the front foot and dictating the tempo of the game. The Foxes looked lively in attack, with Marc Albrighton dragging a shot wide before Danny Simpson and Riyad Mahrez connected well down the right hand side to put early pressure on Chelsea.

Shortly before the half-hour mark, Álvaro

Leicester somewhat reverted to the style of football that lead them to Premier League glory. The Foxes lined up in a compact 4-4-2 and looked to create space for Jamie Vardy in behind the Chelsea defence.

However, the Foxes struggled to be productive in possession, and when they didn’t have the ball, were undone by Chelsea’s wing backs who made the pitch wide and caused Leicester problems down both flanks.

The visitors took the lead with minutes to play before half time. A poor pass from Kelechi Iheanacho left Mahrez at a disadvantage. The Algerian lost the ball, and Willian breezed straight through the Leicester side, before feeding the ball into Álvaro Morata. The Spaniard curled the ball beyond Schmeichel to net his first goal since Boxing Day and send Chelsea into the break with a 1-0 lead.

Vardy had a glorious chance to level the score less than ten minutes into the second half. Ndidi lofted a precise ball into the box, but the England striker couldn’t get a clean enough connection with his head and the ball looped over the crossbar from 10 yards.

Leicester looked to commit more men forward in the second half, which made for a more expansive game as they opened themselves up to further Chelsea breakaways.

Both teams created half-chances, with Morata getting close to the end of a Moses cross and Vicente Iborra firing a long-range shot over the bar for Leicester.

With fifteen minutes on the clock, Leicester earned themselves a deserved equaliser. Riyad Mahrez passed Marcos Alonso down the left and side and drove a cross into the box. Iborra had two close-range shots blocked, but Vardy was on hand to smash the ball into the net from just two yards.

The Foxes could have taken the lead two minutes later when, buoyed by their goal, substitute Shinji Okazaki was inches away from getting on the end of a whipped cross from the left.

Chelsea pushed forward with less than five minutes on the clock, but Schmeichel did fantastic to smother the ball on two occasions to deny Morata from close range.

A much-improved Leicester used their momentum to push on for a winner at the end of the second half, with Albrighton and Mahrez looking threatening down the flanks. Chilwell and Simpson looked to join in and put plenty of balls into the box, but Chelsea stood firm to take the game to extra time.

Against the run of play, Chelsea scored just before the interval as they had done in the regular 90 minutes. Pedro made an intelligent run and rose highest to beat the onrushing Kasper Schmeichel to an N’Golo Kanté cross from deep. His contact was enough to guide the ball into the back of the net and give Chelsea the lead.

Leicester introduced Adrien Silva and Fousseni Diabaté for the final 15 minutes, as the Foxes desperately looked to salvage a late equaliser.

The duo made a difference, with a great pass from Silva opening up an exciting piece of play for Leicester. Diabaté and Mahrez both had shots blocked from inside the area as a result.

Chelsea saw out the game with the class that saw them crowned Premier League champions last season, to progress to the semi-finals and take another step towards their only chance of silverware this season.