?Chelsea all but ended their Champions League qualification hopes after dropping two more points against West Ham at Stamford Bridge on Sunday.

Goals from Cesar Azpilicueta and Javier Hernandez ensured that the spoils were shared on the day, and the Irons are now in a healthy position in the Premier League to secure their safety for next season.

Chelsea were much the better side in the first half, restricting West Ham to just one real opportunity. Lone striker Marko Arnautovic peeled off Gary Cahill and on another day might have unleashed a first time volley, but opted to bring it down allowing Cahill and the supporting Antonio Rudiger to get back in position to make a block. The Blues had the majority of the ball as one might have expected, with N’Golo Kante a willing runner to try and break the lines in midfield, and Willian, Eden Hazard and Alvaro Morata working really well together in the final third.

The Hammers defended resolutely though, and sat in to try and soak up some pressure. Chelsea did break through in the 23rd minute but Morata’s cheeky nutmeg finish was correctly rule out for offside.

They had the ball in the back of the net for real some 10 minutes later though through Cesar Azpilicueta. Having forced a corner after a fine save by Joe Hart, the Blues then quickly took it short to Victor Moses who swung it towards the back post. Morata did well to knock the ball down and the Spaniard was the quickest to react and trickle the ball home, and all the Irons’ good defensive work up until that point had been undone, much to the frustration of manager David Moyes.

The half also featured a warm round of applause from all corners of the ground in the eighth minute of the game in tribute to late club legend Ray Wilkins, who passed away earlier this week after suffering a heart attack.

Stamford Bridge paid tribute to Ray Wilkins, our former captain and assistant coach, once again in the eighth minute of the game, with a round of applause ringing around the stadium. RIP, Ray. pic.twitter.com/oFRH7tpyzL

It was almost 2-0 within a minute of the restart, with the lively Hazard setting up Willian inside the box. The Brazilian dragged his effort wide – a real let off for West Ham.

Chelsea kept coming, with Hazard and Willian orchestrating proceedings throughout. The pair, operating as inside forwards looked dangerous every time they picked the ball up in and around the penalty box. Morata should probably have doubled the hosts’ lead on 54 minutes when he headed over from the six-yard box from a Willian corner. The Spaniard rose well, as he does, but somehow failed to keep his effort down.

The former Real Madrid striker had the ball in the back of the net moments later but was again flagged for being offside.

Chelsea were made to pay for their wastefulness when in the 72nd minute Cahill failed to clear inside his own box. His header fell to Arnautovic who quickly fired in a low cross for substitute Javier Hernandez to finish emphatically past Thibaut Courtois. 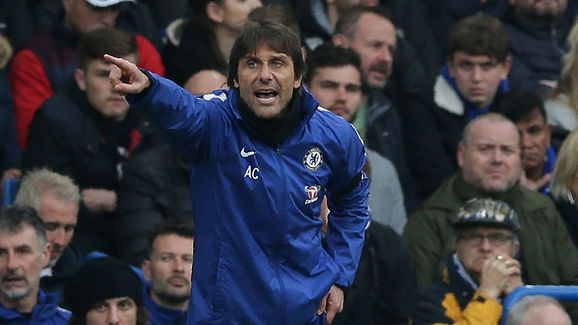 The goal certainly breathed new life into the visitors, who started to believe they could actually steal all three points. Arnautovic, who had been isolated for the most part, started to look more dangerous in particular.

Marcos Alonso almost restored Chelsea’s lead with a ferocious drive from the edge of the box but Hart was somehow equal to it with a stunning save with his fingertips.

It was end-to-end stuff for the final 10 minutes and it look very muich as though either side could have won the game. Substitute Olivier Giroud was the next Chelsea player to be thwarted by Hart, with the England hopeful tipping his header onto the post. 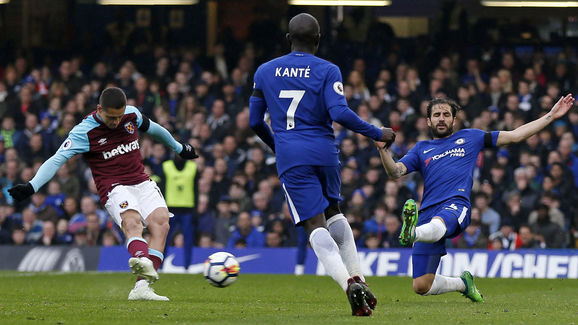 There was to be no winner in the end though as West Ham weathered a late Chelsea storm, and it now looks highly likely that the Blues will not be featuring in next season’s Champions League.

West Ham gain a precious point, and arguably are only in need of one more win to ensure they will not be relegated this year – they sit six points clear of danger with six to go.