?When Chelsea bought Alvaro Morata in the summer, they knew what they were getting. Having come off the back of a Premier League title win, the club spent a record amount on the Spaniard to bring him in from Real Madrid after missing out on Romelu Lukaku.

Opinions are still split on Antonio Conte always wanting Morata and not Lukaku, but that hardly matters now. 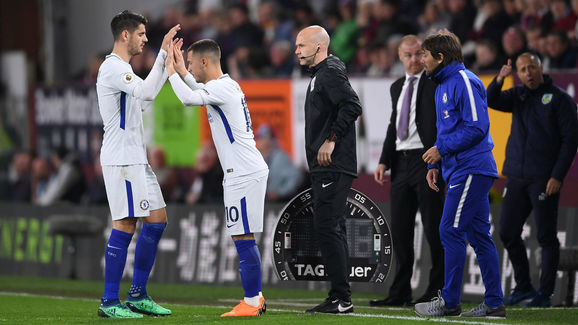 In the Spain striker, the Blues knew they were getting a talented attacker who had a great eye for goal, but one who wasn’t used to being first-choice. It was always going to be a season of adjustment for the 24-year-old, but he seemed to settle in quite well, scoring and assisting a goal on his debut and recording seven strikes in his first seven appearances for the Blues.

Heading towards the end of 2017, however, Morata suddenly went cold – and it wasn’t due to a lack of chances. He simply refused to take them. And his profligacy in front of goal cost him his spot in Spain’s set-up during the last international break.

He has since explained that his drought was helped by persistent back problems and has scored a few goals this year. But his shocking miss during the ?2-1 win against Burnley on Thursday night has done well to underpin the frustrations. Morata has scored 14 goals and handed out six assists in 42 appearances for the Blues. Being involved in 20 goals in a little over 40 outings is decent. Yet it’s simply not good enough for someone who’s supposed to be world-class; at a top club such as Chelsea at that.

So do the Blues need to embark on another striker hunt in the summer? Well they might, yet it isn’t all that necessary.

They have another great option in Olivier Giroud, while Michy Batshuayi should recover from his unfortunate injury by then. The Belgian has shone brightly during his loan spell at Borussia Dortmund this season and was unlucky to get hit with an ankle injury that has ended his season, yet he is expected to be ready for the World Cup and could get his chance at Chelsea if the club decide to keep him.

Even in Morata, the Blues still possess a really good striker. The Spaniard is quick, has good feet and looks to be standing his ground again as opposed to hitting the deck at every opportunity.

A good pre-season should be good enough to sort him out set him straight. He only needs to work on his first touch, his decision-making, and his finishing, of course. There’s also the need for a sprinkle of confidence, something he has clearly been lacking.

While the Blues do need to strengthen in the summer, the striker department really is okay for now, although fans wouldn’t dare complain if another forward was brought in.

A likely managerial change, though, could prove the decisive factor as it relates to summer spending.