Chelsea are set to reignite their interest in Napoli central defender Kalidou Koulibaly this summer, according to reports in Italy.

The 26-year-old Senegalese international has been the subject of long-term interest from several leading European clubs after putting in a series of impressive displays for Gli Azzurri in Serie A.

According to Italian journalist ?areanapoli.itwill ‘return’ for Koulibaly in the summer, suggesting that they have previously made attempts to sign the highly rated defender.

Napoli have previously rejected offers of €60m and €70m,

It is understood that Napoli owner Aurelio De Laurentiis would immediately reinvest any money received in signing a direct replacement, though the journalist says it is ‘too early to name names’ of defenders that could replace him. 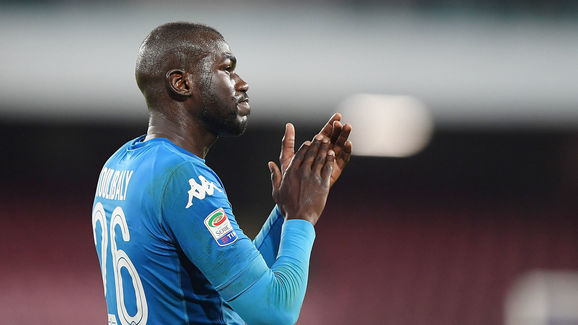 Koulibaly is a versatile defender, who can play centrally in a back four or in any position across a back three. His ability to play in a central three would see him fit in nicely to Antonio Conte’s style of play, should the Italian manager still be in charge at Stamford Bridge next season.

The performances of David Luiz and Gary Cahill have been questionable at times this season, with Antonio Conte relying on young defender Andreas Christensen for the majority of the campaign.

Chelsea have also been linked with a move for Roma defender Alessio Romagnoli recently, but it is unclear whether Stamford Bridge officials prefer Romagnoli or Koulibaly.

However, with the post-summer managerial situation at Stamford Bridge currently looking unclear, it’s hard to imagine any concrete interest from Chelsea being followed up until a decision has been made.