?There’s no denying that Chelsea’s recent – and sudden – ascent into winning form has coincided with the presence of one self-professed ‘gorgeous’ man. Olivier Giroud’s weekend strike lifted his goalscoring tally in blue to five in fifteen games, and his all round play and influence has offered a glimpse into the kind of player he could become in a blue hue.

For a start, in scoring the only goal against ?Liverpool at Stamford Bridge on Sunday, the Frenchman surpassed a certain Cristiano Ronaldo on one particular European chart.

The chart in question was, naturally, the prestigious ‘top scorers of headed goals across Europe’s top five leagues since 2015/16’, with Giroud’s 17th taking him above Ronaldo’s meager 16. What this shows, apart from the fact that Giroud is officially a better player than last year’s Ballon d’Or winner, is the 31 year old’s consistent potency in front of goal – clearly especially in the air. 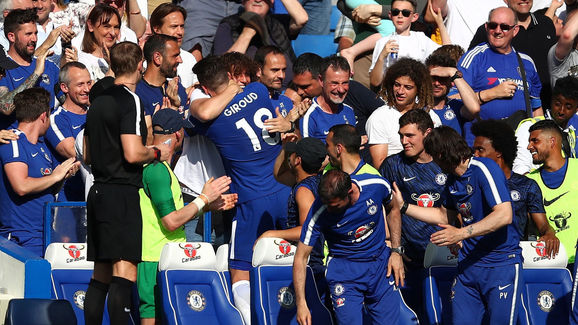 With his penchant for all things aerial, the Frenchman is not an outlier in south-west London. After all, ?Chelsea have scored 16 headed goals this season, three more than anyone else in the 2017/18 season (incidentally Giroud’s former side Arsenal are second).

Despite Alvaro Morata’s supposed impotence in this campaign, the Spaniard is another man with a formidable forehead. Last month he set a record for the most headed goals scored by a Chelsea player in a season, with seven.

In light of these qualities, you would expect last year’s champions to figure heavily amongst the leagues top individual crossers.

You would expect wrong. The club have no representatives in the top 20, with Cesc Fabregas coming in at joint 22nd alongside Southampton’s Cedric Soares with 131 crosses, 106 less than Kevin De Bruyne’s table topping total.

Additionally, despite an enduring narrative that the Blues’ strikers are squandering opportunities left, right and centre, the club are placed sixth on the Premier League’s teams with the most chances missed, with only 44 compared to Manchester City’s 63.

What these statistics imply, is that Chelsea are in possession of a somewhat untapped resource of headed gold, and that their much maligned forward line is not quite as inefficient as it has been touted as being. 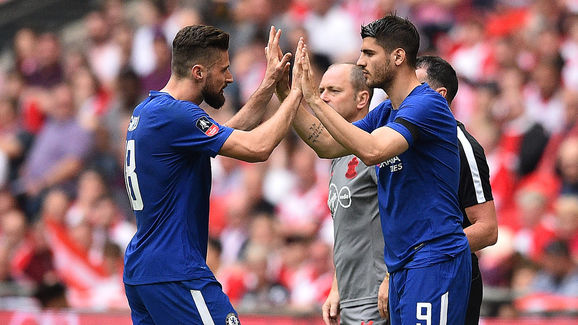 What they also show is that, contrary to popular opinion, there is little need for mass reinvestment in the Striker position as of yet. While it would be ludicrous to dispose of Alvaro Morata so early on in his Premier League career, it would be equally foolish to dismiss the contribution Giroud could make in the seasons to come.

At just £18m, the Frenchman was seen by some as a mere stopgap at Stamford Bridge – a way in which to temporarily appease Antonio Conte’s fervent desire for any kind of attacking reinforcement.

However, in just a short time, Giroud has displayed the kind of qualities that would probably warrant twice his January price in this summer’s transfer window. While Morata, as Chelsea’s record acquisition, should be (and hopefully is, ?despite the rumours) seen as the club’s long-term number nine, the French international is more than capable to carry the line if need be.

He is a proven entity at this level, and such a characteristic should not be overlooked, however enticing the idea of fresh faces can be in this age of transfer dependency.

Add to this the returning Michy Batshuayi, who showed what a devastating finisher he could be with enough game time at Borussia Dortmund, and Chelsea’s 2018/19 scoring prospects seem much healthier than is currently being purported. At the least, this year’s leading tally of 12 (with two matches to spare) in the league should be bettered.

All they need now is a decent crosser of the ball on either side. Chris Brunt anyone? He’ll definitely be available. Or perhaps they can force Rory Delap out of retirement. Come to think of it, Sam Allardyce will presumably be looking for a job as well. This could get very interesting.