Roma attacker Edin Dzeko has opened up on why he chose to remain in ?Serie A back in January, turning down the advances of ?Chelsea. The Bosnian forward enjoyed a successful stint in the ?Premier League with ?Manchester City before moving to Rome, and has admitted that he wasn’t prepared to leave when the Blues came calling.

It was a transfer scenario which eventually saw Antonio Conte forced to turn to Olivier Giroud to strengthen his forward line. The Italian was after a strong target man as an alternative for Alvaro Morata, and Dzeko fit the bill perfectly. 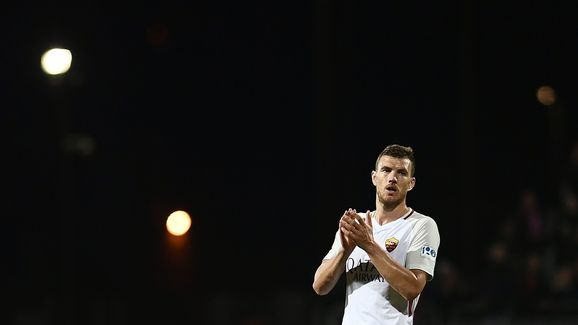 However, the 32-year-old was – and still is – happy in the capital of Italy.

“It has been tough period, a lot of stories and information, true and false, were written, everything went through my head, I wasn’t clear or certain of anything at the time.”

“Now I will play two games for Bosnia and then we’ll see [where will I play].

“I have another two years of contract, so Roma has to be asked about it too.”

He did, however, go on to mention how he used to dream of playing for league rivals AC Milan – who are on the hunt for a striker this summer.

“While I was playing for Zeljeznicar, AC Milan was my big wish.

“After I won the German title with Wolfsburg in 2009, I was very close to Milan, but Wolfsburg would not let me go.

“But my career went very well and I am currently very happy in Rome.”