Crystal Palace are hopeful of luring Chelsea striker Tammy Abraham to Selhurst Park this summer after the forward’s loan at Swansea City came to an end, according to reports.

The Eagles were able to bring Ruben Loftus-Cheek across London on a season-long loan move last year. The 22-year-old made 25 appearances across all competitions, scoring two goals and claiming five assists. 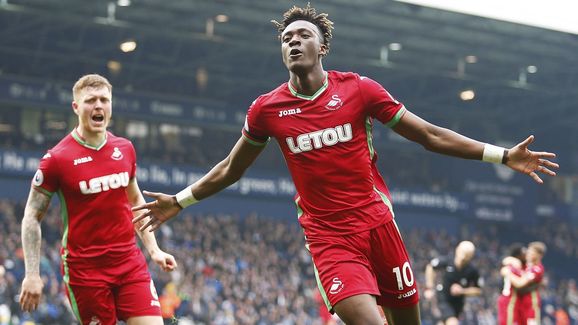 And Crystal Palace are now hopeful that they can sign another player on the fringes of Chelsea’s first team this summer.

The Guardian claim that Palace have declared their interest in England international Abraham ahead of the new campaign. The 20-year-old was part of Swansea’s squad that was relegated last season.

Abraham adapted to life at the Liberty Stadium well last season, scoring four Premier League goals by the start of October. But the Chelsea striker’s form dipped along with Swansea’s, finding the back of the net just four more times across all competitions.

News of Crystal Palace’s interest in Abraham has come at the same time that Christian Benteke is being linked with a move away from the club.

Rumour has it that former Eagles defender Chris Coleman is interested in signing the Belgium international this summer – the former Wales manager has just been appointed as the head coach of Chinese giants Hebei China Fortune.

Benteke was an instant success in the Premier League following his £8m arrival at Aston Villa in 2012. But a big money move to Liverpool in 2015 saw his career stall and the Belgian has never really recovered from his spell at Anfield.