?Oh, Super Jack. Where did it all go wrong? Was it the smoking? The glass ankles? Or was it just the consistent and unerring hype machine that followed him everywhere he went, even when that was predominantly the injury table.

Either way, his days as ‘?Arsenal golden boy and England 2022 World Cup Hero #SuperJack’ are no more. He will have to find a new nickname in new surroundings, wherever that may be. And why couldn’t those fresh pastures be in West London?

As a wise man once proclaimed, ?Chelsea’s biggest problem right now is their ailing midfield, so why not take a chance on the one time English Xavi, even if that one time was seven years ago. Of course, Wilshere has sparkled sporadically in the time since, but only in all too brief fits and starts. The career that those 90 minutes that dazzled the likes of Iniesta, Xavi and Busquets foretold has not materialised. But that doesn’t mean some kind of semblance of that player could not be restored within the hallowed realms of Stamford Bridge.

While in many ways Wilshere was the archetypal Arsenal player – ethereal, mercurial, meagre, unreliable, brittle, overrated, underrated, an underdog, a villain – you could also say he never truly fit in at the Emirates. He never quite carved out a place in the starting lineup, and whenever he did have any kind of run in the team, it would always invariably be curtailed by injury.

It would be hard to attribute blame to either party for this endless cycle of recovery-promise-form-injury, but Jack never seemed truly comfortable in North London, even when he was momentarily pain free. While a sincerely ‘loyal’ representative of the Gunners, there was always something blocking his path under Arsene Wenger, whether that was a glut of similarly inclined midfielders or an all too enticing cigarette.

Now, some might be dubious that the same problems would crop up at ?Chelsea – after all, a pack of fags are as readily available in West London as they are in North. But an abundance of midfield talent? Not so much.

Another cause for suspicion would be the presence of another former English rose currently rotting in the Pensioners’ stands – Ross Barkley. The former Everton starlet’s stagnation at the Bridge is a cause for concern for everyone involved, but fans will be particularly reticent to embrace one more has-been fragile English midfielder.

The key difference with Wilshere, of course, is that he would come free of charge, which will no doubt appeal to the Chelsea board, in this summer of all summers. Another man who may be eager to get his hands on Jack is Chelsea’s prospective manager, Maurizio Sarri.

While Wenger’s free flowing football wasn’t incompatible with Wilshere, Sarri’s famed vertical passing structure could add a new dimension to his game. At Arsenal, he would often lose the ball in trying to force a move through with direct running, or a flick too far. Under the Italian, he could develop a more patient and deliberate streak, while exploiting the space that this provides.

Further reasons for optimism include the 26-year-old’s considerable Europa League experience (a cruel joke, on both) and an emotional reunion with Cesc Fabregas in the midfield. Speaking of Cesc, and to come full circle, when returning to the much revered tape of his exploits against Barcelona, his ceiling emerges not as one similar to Xavi (an ?ardent admirer though he is), but of Iniesta.

Far from orchestrating the game in a metronome like fashion, Super Jack was ducking and weaving throughout, using his slight frame to implausibly wiggle out of oncoming challenges. A player of that dynamism is badly needed to lift the attacking burden of Eden Hazard (or god forbid replace it).

Though it has unequivocally stunted his growth as a player, there is a positive light to be shone upon the injuries that have plagued his career. While it has hampered his evolution as a player, it has not done the same to his life. The midfielder has swapped the fags for a gluten and dairy free diet, lending credence to the claim that he’s now in the shape of his life. 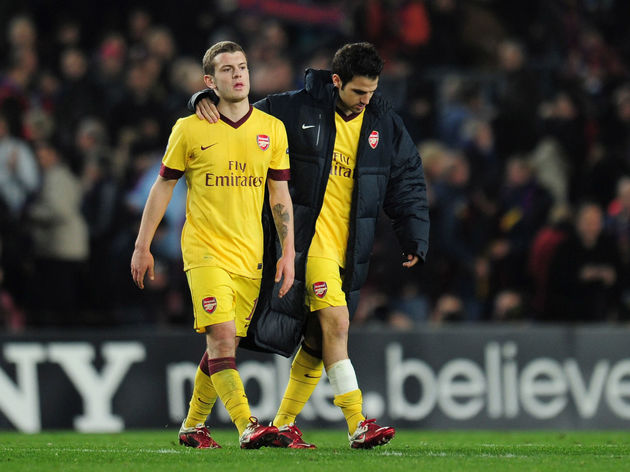 It’s that kind of will power that is a must if he is to revive a career that has threatened to peter out before it ever really got started.

The return of Ruben Loftus Cheek to Chelsea is one that all Blues fans can’t wait for – the 22 year old is, all things going to plane, set to become a beacon of light at an increasingly gloomy Stamford Bridge in 2018/19. But even Loftus, the great man that he is, will need help in his inaugural season as a major figure for Chelsea. An intact (and gloriously free) Wilshere would be the perfect foil for that, lightening the young man’s load when necessary.

With Wilshere in, and preferably Barkley out, things would finally be looking up for the 2016/17 Premier League champions. All Chelsea need to bring in after that is someone who can actually play 20 games in a season. Oh well, beggars can’t be choosers. And this is definitely the closest that Chelsea have come to beggars in the 15 year reign of Roman Abramovich.