Giving his thoughts on Kevin de Bruyne, Eden Hazard and club colleague Romelu Lukaku in a video for Rio Ferdinand’s official YouTube channel, Rashford explained what makes each of the Belgian trio so good, but also where England might have hope.

“He’s one of the best passers, and when he comes deep [to get the ball], and then builds play up from there, sometimes it’s tough to deal with. You’ve got to have someone close to him, because if you stop him, you half stop the other two,” the United man added.

“For a midfield player, goals are probably the one thing that people don’t pay very close attention to. But, for me, he could definitely score more goals with his technical ability.”

Rashford described himself as a ‘big fan’ of Hazard, explaining, “I think people don’t put him in that [elite] category yet just because of the goals – he doesn’t score as much as some of the others [at that level]. Based on his actual performances and his ability, he’s got to be up there.

“When you give him the ball and someone’s behind him, the way he turns people and changes it from keeping possession into going for goal…there aren’t many of those types of players.

“We have the players to stop him, but you can’t make mistakes against these kind of players.” 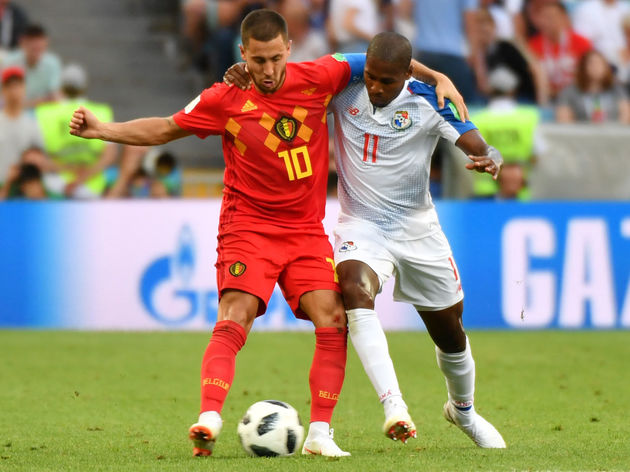 As for Lukaku? “He’s a beast,” Rashford said.

“He’s a massive threat and, I’m not going to lie, he’s tough to deal with. That’s why I’m saying it’s important that you stop [De Bruyne & Hazard], because if he doesn’t get any service then it’s difficult for him to do anything.

“[His goal record] doesn’t surprise me because when you see his work ethic, it’s his determination to improve. There’s been times when we’ve stayed behind [after training] just doing finishing. We could be there all day trying to better ourselves. It’s a quality in itself.”

Despite suggestions that finishing second in the final group standings would mean a more favourable knockout draw, England are expected to name a strong team for Thursday’s clash in Kaliningrad, which means Harry Kane is likely to start. There are, however, doubts as to whether Belgium will do the same. Lukaku in particular has been carrying a knock since facing Tunisia at the weekend, while Hazard has also been watched in training since. Three other Belgians, including De Bruyne, are on yellow cards and may be rested to avoid them picking up a suspension and missing the last 16.