?Colombia star James Rodríguez could reportedly be playing in the ?Premier League next season, with ?Arsenal and ?Chelsea both tipped as possible destinations for the highly talented midfielder and winger.

According to a report in ?Diario Gol, Rodríguez is unlikely to move to ?Bayern Munich on a permanent basis, having spent last season on loan from ?Real Madrid at the Allianz Arena. The report claims that the Colombian does not have a good rapport with Bayern’s new coach Niko Kova?. 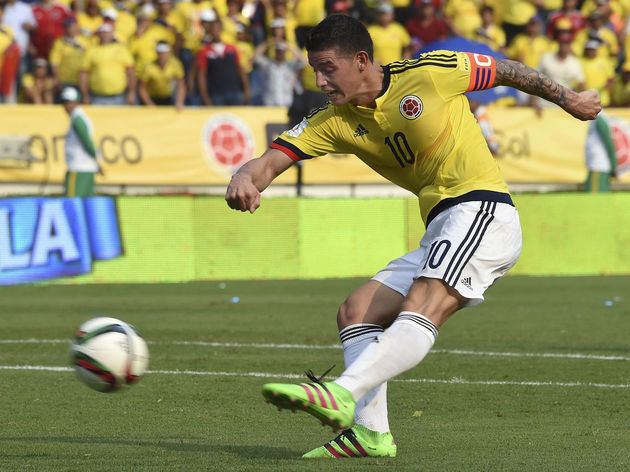 If this is indeed the case, it could be regarded as a setback for Bayern, who – according to ?Sky Sports Germany – were extremely keen to retain Rodríguez’s services. The Bayern hierarchy were reportedly willing to pay as much as €55m (including the loan fee) for the 26-year-old, who scored seven goals in 23 league appearances for the Bundesliga champions last season.

However, according to the Diario Gol report, Bayern could potentially exercise their purchase option, pay Los Blancos €42m and then sell Rodríguez for a higher fee.

It would arguably be a tremendous coup for either Chelsea or Arsenal to sign the Colombia star, who won the Golden Boot at the last ?FIFA World Cup in Brazil in 2014 and has also impressed at this year’s edition in Russia. Both Premier League sides are looking to rebuild after disappointing seasons.

Diario Gol also lists Serie A giants Juventus as potential suitors for Rodríguez. La Vecchia Signora once again fell short in the ?UEFA Champions League last season, and the Colombian could potentially provide them with an extra creative spark. However, there is another twist – Rodríguez was injured in ?Colombia’s 1-0 win over Senegal in their final Group H clash. This could be favourable news for England – Colombia’s opponents in the round of 16 – but not such good news for Arsenal or Chelsea.