Belgium and ?Chelsea goalkeeper Thibaut Courtois claims to be solely focused on the job at hand as he prepares for the World Cup semi-finals.

The towering stopper emerged heroic as the Red Devils shocked Brazil by eliminating them from the tournament last week. And given his stellar overall performances between the sticks, he has again been linked with a sensational switch to the Bernabeu as rumours of a ?Real Madrid move keep picking up pace. 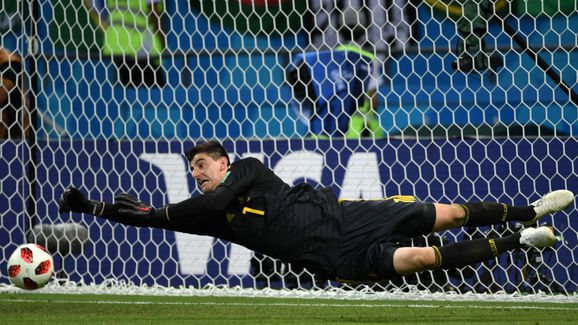 Courtois, though, insists he will only lend thought to his future after the culmination of the World Cup as he is totally focused on helping Belgium make their mark as football greats.

“This World Cup can mark our generation and we have to be totally focused.

Speaking on his immense display during the showdown with the South American side, the keeper revealed how proud he is of the stoppage-time save off Neymar’s potentially game-tying shot.

“I felt very good before I started, I was focused from the first minute and at all times I thought we were going to win,” he said.

“My teammates told me that if I was good we would beat Brazil and when I saved Neymar’s shot, I said ‘Damn!’

France are now the only ones standing between Belgium and the final. And Courtois reckons Didier Deschamps’ men will present a tougher challenge than the Brazilians.

“Against them we have to be even more concentrated than against Brazil,” he declared.