New Chelsea boss Maurizio Sarri has suggested that he’s satisfied with Alvaro Morata amid the rumours of a move for ?Juventus striker Gonzalo Higuain.

The Spanish forward, who joined the Blues from ?Real Madrid last summer, was rather impressive against ?Inter on Saturday, and it was his work in the box that led to his side’s only goal from open play.

Despite getting off to a hot start in a Chelsea jersey last season, Morata’s form fizzed out mid-campaign and sources are claiming the Londoners are looking to offload him.

Sarri, however, has said that he’s confident over the striker’s future at Stamford Bridge. “Because we move the ball very quickly? This evening we moved the ball well, but I think not at the right speed. 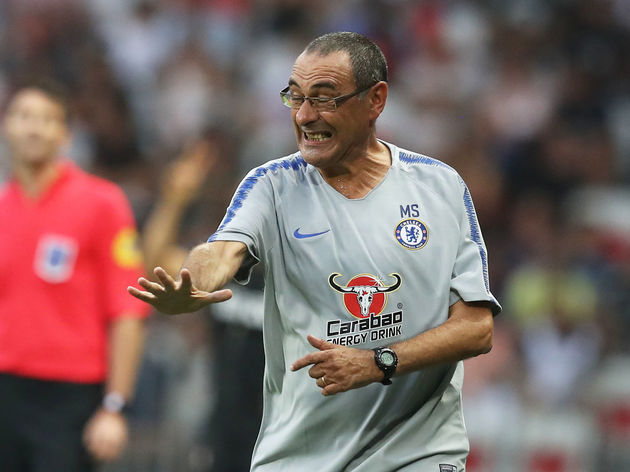 “You have to move the ball at a great speed on the floor, otherwise we risk playing for 90 minutes with 75 per cent of possession but without scoring. So we have to improve on this.”

The manager was also full of praise for the club’s new signing Jorginho after another impressive performance in midfield for the Blues. The Brazilian joined last season’s FA Cup winners from ?Napoli this summer and has slotted into the team quite nicely.

“For Jorginho, this is a normal match,” he added. “I think Jorginho has technical ability but he has a great spirit and mentality. So for this way of football, Jorginho is a wonderful player.”

Sarri met with Blues owner Roman Abramovich for the first time since taking over from Antonio Conte before the match against Inter, but he would not be drawn into revealing what was discussed.

“It’s normal,” he said. “I think it’s normal but also I think it was a private meeting so I don’t want to speak about this. I’m sorry!”