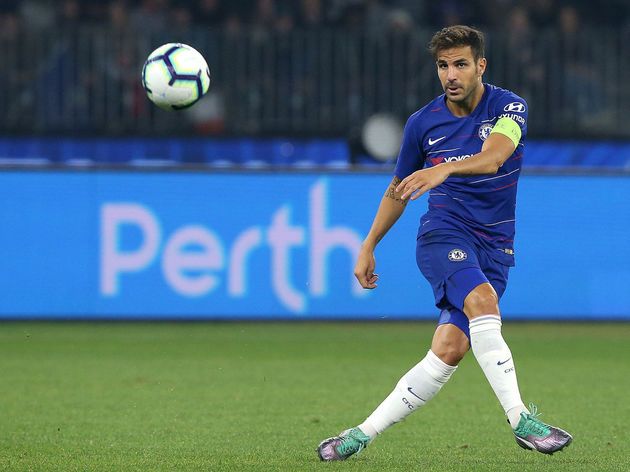 “Cesc is still out,” Sarri said during his pre match press conference, via the ?Daily Star.

“I am sure the injury is not serious, but he has pain in the knee. The pain is still there so for him it is impossible to run on the pitch, only in water,” he added.

When Cesc Fabregas is fit again I don’t see him getting close to starting I’m afraid.. looks like Sarri prefers Jorginho, Kovacic, Kante and Barkley to him.

While Fabregas has remained on the sidelines, Chelsea’s midfield have continued to grow under new management with the newest acquisition in Jorginho, and N”Golo Kante impressing in the middle of the park.

“Jorginho in this moment is a very important player for us and he is used to playing my football.

He is very useful for me, first of all, but also for his team-mates. Kante is a great midfielder, and he is able to play in every position in my midfield. It’s not a problem for him! I have been surprised by the technical qualities of Kante,” he added.

The midfield pairing will once again be hoping to hit the ground running against the Cherries to maintain their unbeaten league record this term, but Sarri is wary of the threat Eddie Howe’s side can pose after their bright start to the season.

“Eddie came to Empoli three or four years ago for a few days, and then I had three days with him when Napoli played a friendly in Bournemouth last year.

“I know him very well. He is a very interesting young coach. He will make a mark in English football in the future.

“Bournemouth are very dangerous opponents for us. They are well organised, they are dangerous in counter-attacks, so the match will be very difficult for us, but we want to be in control of the match, and try to gain points,” he added.