In appointing Maurizio Sarri as Antonio Conte’s successor, Chelsea have possibly given themselves the best chance of keeping Eden Hazard at Stamford Bridge.

Of course, they could have probably made his stay a certainty by luring his idol Zinedine Zidane to London. Yet, based on pure football strategy, Chelsea couldn’t have gotten a better coach to hone Hazard’s supreme attacking talent; plus Zidane wasn’t available anyway. This isn’t to suggest that the French legend isn’t as good a coach as the Blues’ new boss – he is significantly better where trophies are concerned. But one has to admit that Zidane won his silverware with Real Madrid partly because he walked into one of the best jobs in world football. It’s rather difficult to imagine him being as successful with the current Chelsea side.

Chelsea have gotten off to a roaring start under their new Italian boss with four wins in four games, matching their best-ever start to a Premier League campaign.

Sarri’s style of play – a possession-based, high-pressing system that promotes free-flowing attacking – has hardly shocked anyone. His success at Napoli ensured the ‘Sarri-ball’ brand gained popularity across Europe. So it came as little surprise when the Blues began their season looking markedly different to the side who had played under Conte in the previous term. Hazard, in particular, is shining under Sarri’s stewardship and the Belgian certainly looks to be enjoying his football. Gone are the demands of tracking back and helping in defence, Hazard is only tasked with doing what he does best and it hasn’t taken any time to pay off.

In just two starts, the winger has already scored two goals and assisted two others. His influence on the pitch is growing game by game and he seems to have been given the freedom to roam as he pleases.

“I like to have the ball. Not in my own half, but in the last 30 metres,” the 28-year-old told Chelsea TV after helping the Blues beat ?Bournemouth 2-0 at home on Saturday.

The topic of Hazard’s future was a troubling one for the Blues all summer. But, with the transfer window closed for all European sides, they can rest easy until January.

The player has made it clear that ?Real Madrid would be his most likely destination if he were to ever leave Chelsea. But he is also very unlikely to force a transfer as it just doesn’t seem to be in his nature, despite all the time spent around Thibaut Courtois.

The Blues are keen to have him sign a new deal – his current contract expires in 2020 – and if Sarri’s system can keep him happy, in terms of tangible success, they could be in a very good position by the time the season comes to a close. 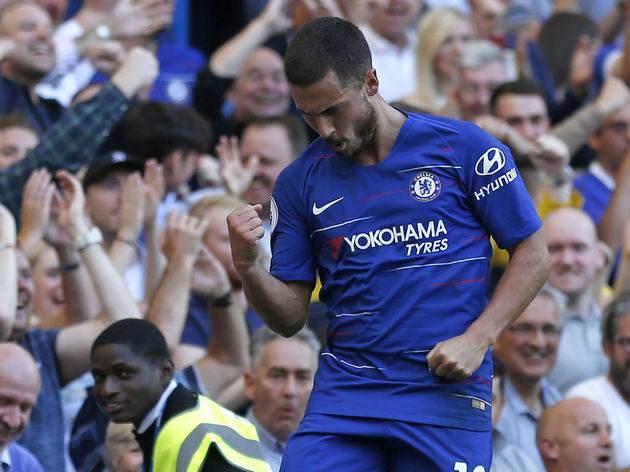 Can Sarri make the attacker forget about Madrid? Only time will tell.

But, given the way things have panned out so far, Hazard will definitely have more reasons to stay should the Spanish giants come knocking next year.