?Earlier this week, Chelsea defender Cesar Azpilicueta claimed he was ?perfectly suited to Maurizio Sarri’s tactics. To an extent, he is correct, yet both he and Marcos Alonso lack a much-needed factor to work with this style – pace.

Sarri encourages his full backs to press high up the field, in the hope that they will aid in recovering possession and immediately start Chelsea’s attack. Azpilicueta is right in saying he is a perfect fit for this role, as he is undoubtedly one of the Premier League’s finest one-on-one defenders. 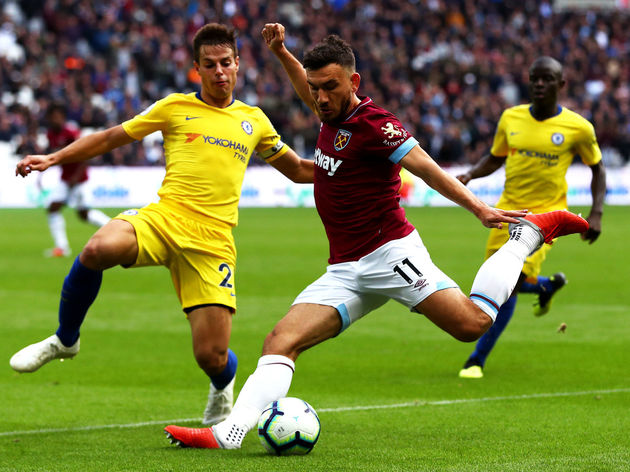 He is capable of putting pressure on the opposition and will fancy his chances at coming out on top of any individual battle. When he wins the ball back, he is able to serve up a fantastic cross, just like those which gifted ?Alvaro Morata a handful of goals during the early days of his ?Chelsea career.

However, when Chelsea’s attackers lose the ball, their defence is in deep trouble. Wingers are often fast to burst forward and occupy the space left behind by both ?Azpilicueta and ?Alonso, and the Spaniards are simply not fast enough to recover.

Sarri’s side can consider themselves lucky to have emerged with a point against ?West Ham. Felipe Anderson, Michail Antonio and ?Andriy Yarmolenko were all happy to sit deep and defend, in the knowledge that they could burst forward to beat Chelsea’s full backs for pace.

Top five passes at Chelsea in the PL this season.

Jorginho and the back four…. #Triangles #Regista

Yarmolenko came especially close to winning the game for the Hammers, missing an incredible chance in the dying embers of the match – an opportunity that came from West Ham’s exploitation of Chelsea’s lack of pace in defence.

At ?Napoli, where Sarri built up his impressive reputation, his strategy often differed slightly depending on the opposition. Faouzi Ghoulam was always eager to press high and get involved in attack, whilst right back Elseid Hysaj often remained in a more defensive position to give his side some extra security. However, we have yet to see this more conservative style of play during Sarri’s short tenure at Chelsea. Both full backs can always be seen pushing high up the pitch, often to devastating effect. Alonso’s attacking capabilities are second to none in the full back position, whilst Azpilicueta also possesses an impressive eye for a cross.

When this tactic works, it often produces eye-catching results. The two contribute to a beautiful style of attack and the team can dominate their opponents. Unfortunately, it is not a perfect tactic, and the match against West Ham was the perfect example of this.

Chelsea were left with two central defenders against West Ham’s devastatingly fast attackers, which explains why the Blues almost lost the match. Had Azpilicueta or Alonso remained in a more defensive position, they may well have found themselves comfortably able to neutralise the oncoming threats. One of the full backs simply must remain in a more defensive position, or else Chelsea risk becoming overwhelmed by their opponents.

When it comes to deciding which full back should remain in defence, it is a straightforward decision. Alonso has shown a fantastic goalscoring ability and has incredible positioning in attack, and so should be the one to go forward more often.

On the other hand, Azpilicueta’s passing range has made him an effective threat from deep, as proven by his numerous assists to Morata whilst playing as a centre back last season, and so he should be the more natural choice.

The two have the abilities to still be serious attacking threats but, in remaining in a defensive position, Azpilicueta will give his team the best chance of victory.