Chelsea midfielder Jorginho has revealed that Maurizio Sarri’s presence at Stamford Bridge was a huge influence over his decision to join the Blues over Manchester City.

The Italian has settled into life in England superbly so far, acting as the driving force behind Chelsea’s unbeaten league campaign. His acute understanding of Sarri’s philosophy has been key to that success, and he has discussed how his relationship with the former Napoli boss persuaded him to make the move from the Serie A in the summer. 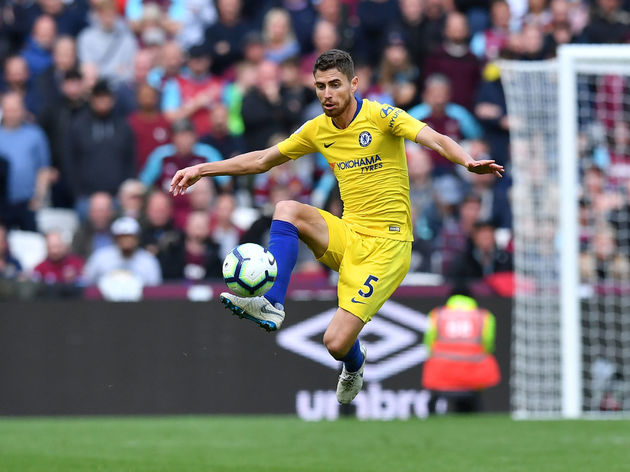 “?Chelsea is a team that has so much to offer and it was always easy to come here but obviously Maurizio Sarri played a big part.

“He’s a very straightforward man who likes to work a lot on the pitch, working on the tactical side and the organisation of the team. “The transition was actually quite easy because all the players at Chelsea play at such a high level that they are open to new ideas and so they are open to putting into practice what Sarri preaches.”

Jorginho has won praise for his possession-orientated brand of football which has seen him make the most passes in the league with 853 – over 100 more than his teammate Antonio Rudiger who claims second place. The 26-year-old revealed that his passing expertise is nothing new and that it is simply how he likes to play football.

Dressing room banter. Eden Hazard in @thetimes: “In the dressing room we say that Sarri is the father of Jorginho because they always talk & laugh together. I understand why because Jorginho is a fantastic player. He makes life simple for us: the right ball at the right moment.” pic.twitter.com/MoJwJgOmsT

“I’ve always wanted the ball, playing one-two’s and quick, short passes. Not only do I think that’s always been a characteristic part of play, I think it’s one of the reasons why it goes so well with Sarri’s football.”