?Sarriball will look to roll on this weekend as Chelsea host Crystal Palace in the Premier League on Sunday afternoon.

Roy Hodgson takes his men on a short trip across London to face a Chelsea team yet to lose in any of their opening ten league fixtures this season. Palace themselves arrive off the back of a decent home draw against Arsenal, but did lose disappointingly to Middlesbrough midweek in the Carabao Cup. Check out 90min’s preview for Chelsea’s latest fixture below.

The big question is whether or not ?Eden Hazard will be fit to return against ?Palace. The Belgian missed last week’s 4-0 trouncing of ?Burnley and was absent for the cup defeat of Derby, but by all accounts he should be just fit enough to return to action this weekend. ??Olivier Giroud is also a slight doubt, Alvaro Morata should start in his place. For Palace, at the back Joel Ward and Scott Dann won’t be fit enough to feature. Further up field, Christian Benteke still remains absent with a knee injury.

In Premier League ?history, this particular London derby has seen the two teams clash on 18 different occasions. Palace have only mustered four wins in this time. Interestingly, there have only ever been two draws with ?Chelsea taking all three points on 12 separate occasions.

If history is anything to go by, don’t expect an 0-0 draw. Chelsea have managed 34 four goals against Palace in these 18 Premier League meetings. That’s over twice as much as the Eagles’ 15 strikes. However, Palace fans won’t forget their memorable defeat of Chelsea at Selhurst Park last season. The 2-1  victory ended Palace’s run of seven straight losses commencing right from the start of the season and ignited their season.

Chelsea are unbeaten so far in the Premier League this season. Incredibly, they’re one of three teams who still maintain that record, and consequently they sit just third place in the league; two points adrift Liverpool and Manchester City.?

They come into the game having defeated former Chelsea legend Frank Lampard’s Derby 3-2 to lift themselves into the Carabao Cup quarterfinals. In the Premier League, the Blues have slowed just a little; mustering only two wins in their last five, drawing the other three. However, a 4-0 thumping of Burnley last week reminded everyone just how good this team can be on their day. Crystal Palace currently find themselves just three points above the relegation zone, sitting in 14th place with just eight points to their name. Goals have been the main issue for Palace so far, they have only seven in the league this season, while conceding 13 in the meantime. With stats like that, they’ll struggle to lift themselves into a more comfortable position on the table.

The Eagles have been on a bit of an uninspired run of late and failed to muster win across the whole of October. In fact, their last league win came back on the 15th of September when they defeated Huddersfield 1-0.

With Hazard likely to return to the fray, and with the way Chelsea have been firing in goals of late, it seems unlikely the Crystal Palace would be able to outgun their opposition. Palace were impressive against Arsenal last week, but playing away from home is another story.

The trip to Stamford Bridge should be a tough test for Roy Hodgson’s men. They’ll have to defend valiantly and counter sharply if they want to claim anything from this derby. 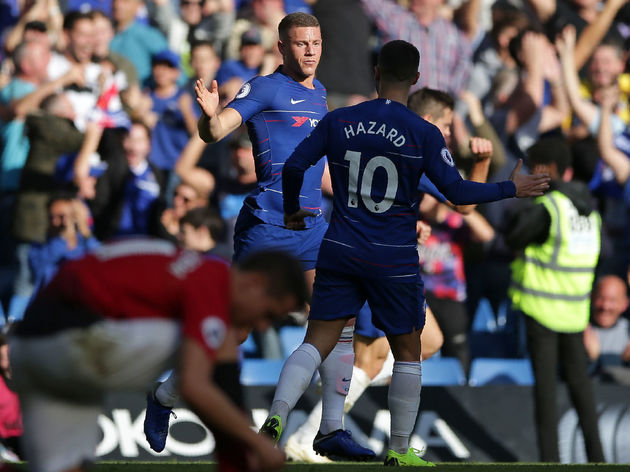 But Barkley, Morata, Hazard and Willian all look capable of scoring, and with Kante and Jorginho doing their thing in midfield, this should be a three point performance from the Blues.