?Maurizio Sarri’s Chelsea side have become the only remaining unbeaten team in all competitions across Europe’s top five leagues, after Manchester United’s last gasp victory over Juventus ended their streak of invincibility.

Jose Mourinho’s side were trailing by a goal going into the last four minutes of normal time, when Juan Mata’s inch-perfect free kicked levelled proceedings before the Red Devils bundled the winner in through an Alex Sandro own goal.

This brought the Old Lady’s imperious run to an end, making the Blues the last team with an invincible record around Europe’s upper echelons. 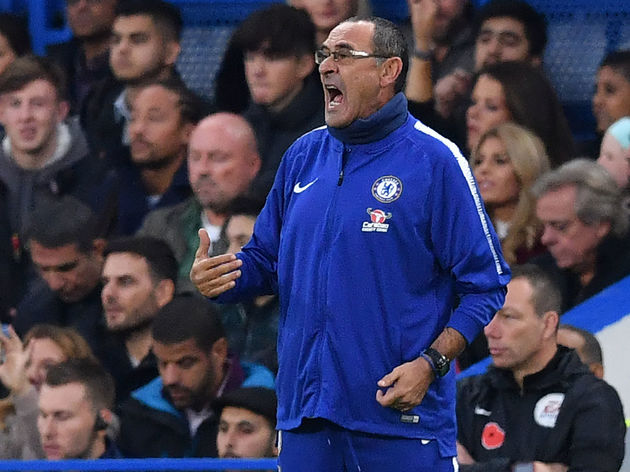 Although Sarri’s side sit second in the Premier League, sandwiched in the middle of a triumvirate of unbeaten domestic sides, their rivals have both lost in the Champions League, whilst the Blues have cruised to three wins from three in the Europa League.

Manchester City came unstuck against Lyon at the Etihad in September, ultimately going down 2-1 to the Nabil Fekir inspired Lyonnais team.

And, while Liverpool lost to Red Star Belgrade on Tuesday night, the Reds had already relinquished their record in a defeat to ?Chelsea themselves at Anfield in the EFL Cup after a sublime solo effort from ?Eden Hazard, the week after they lost 1-0 to Napoli as well.

The Italian’s inscrutable record will be put to the test once more on Thursday evening, when his players will face up to the Belarusian Premier League champions BATE Borisov at the Haradski Stadium in the Europa League.

The club will be without a number of high profile stars, with David Luiz, Antonio Rudiger, ?Alvaro Morata and Cesc Fabregas all failing to travel, but they will be boosted by the presence of Hazard, who has been included in the matchday squad.