?Dani Alves has revealed how close he came to joining Chelsea instead of Barcelona, and says that the move broke down because of the club, not him.

Alves was hot property in the summer of 2007, having just helped Sevilla win the Copa del Rey and their second consecutive UEFA Cup. 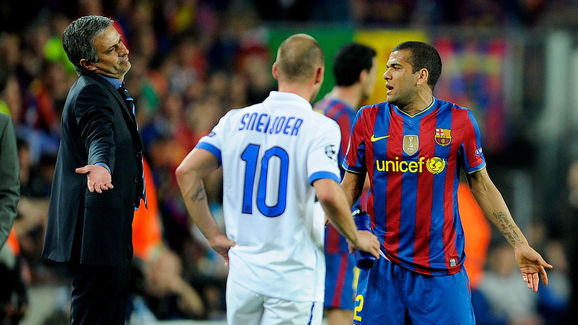 “I like working with competitive people who want to win,” said Alves, quoted by ?Marca. “I was so close to working with him [Mourinho], I was about to go to Chelsea before arriving at Barcelona.

“I thought it was done, that I was going there to work with him. I don’t know if he got different information, that I didn’t want to go or whatever, because since then our relationship hasn’t been so good, but it wasn’t my fault.

“I was convinced that I was going to work with him and form part of his team.”

REPORTER: Dani Alves said “being coached by you is better than sex”…

PEP: I prefer the sex!

The rest is history. Alves joined ?Barcelona the following summer and was part of the legendary team that won all six trophies available to them in 2009. Alves won a total of 23 trophies before he left in 2016.