Being an out of form striker is a tough old gig. The eyes of everyone in the stadium fixed squarely on your every move, the fingers of the social media warriors poised to give you both barrels after another dismal performance. The pressure grows, the knives sharpen, and before you know it you’re being flogged to a lesser side for half your last transfer fee.

This is the dilemma currently facing two Premier League forwards: Manchester United’s Romelu Lukaku and Chelsea’s Álvaro Morata. Both joined their sides in big money moves, and both have failed to live up to the high expectations demanded by the outlay. Between the pair of them, they’ve only managed to net a miserable nine Premier League goals so far this season. 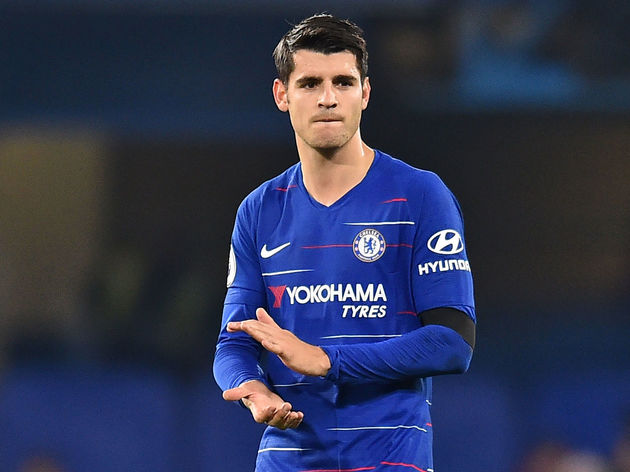 As with most of their young talents, ?Lukaku was never given a chance to excel at ?Chelsea, but he went on to excel during loan spells with West Bromwich Albion and Everton, before joining the Toffees on a permanent basis in 2014. Fresh off the back of three stellar seasons at Goodison Park, he joined José Mourinho at Old Trafford for £75m.

It all started so well for the Belgium international, who netted seven goals in his first ten matches for ?United. After failing to strengthen their squad amid the mega-spending of their title rivals ?Manchester City and ?Liverpool, United have got the 2018/19 off to a woeful start; they’re currently a staggering 14 points off City. With their manager becoming increasingly aggravated, as his side continue to turn every new beginning into another slump, Lukaku’s form has suffered drastically.

The once feared forward, renowned for his domineering presence in the penalty area and ability to bulldoze his way past opposition players, has become a shadow of his former self – netting just four times in the league this season.

In United’s last outing against Crystal Palace – ?a turgid 0-0 draw – Lukaku had just 20 touches during the entire match. It may be that the 25-year-old is suffering from post-World Cup fatigue – after all, his side went deep into the tournament, and a number of Premier League players have admitted to not being back to their best after a particularly gruelling 2018. However, with World Cup stars like Harry Kane now firing on all cylinders again, the problem may run deeper than mere fatigue.

Arguably, the blame for Lukaku’s form could lie with Mourinho – who is certainly not adverse to dishing out some criticism stick to his players.

Throughout the troubled early stages of the campaign, the former Chelsea boss has rotated his squad continually, seemingly unable to find a starting XI worthy of playing on a regular basis.

As a striker, consistency is everything. It’s not rocket science; footballers who play together on a regular basis forge an understanding, which leads – to put it simply – to more goals. With Lukaku spearheading a forever changing lineup of players in a host of different formations, it’s no wonder that he appears completely bereft of his once fearsome goalscoring instincts.

Alvaro Morata has been caught offside more times in the Premier League this season than Bournemouth.

Bar a recent blip, the ‘Sarriball’ revolution at Stamford Bridge has been a roaring success thus far, so it would be harsh to blame the manager in this case. Much like with former Blues man Fernando Torres, Morata’s issue appears to be a crisis of confidence. Time and time again, we have seen the player miss a guilt-edged chance, before looking around in sheer desperation.

As in all walks of life, having faith in yourself in imperative to success, and Morata looks like he could do with a strong dose of self-belief. But there’s only so much that team psychologists – and indeed players themselves – can do for their morale; it’s goals that bring confidence, and the misfiring forward just can’t seem to put together a consistent run of form with Chelsea.

Alternatively, it could be argued that the player has never actually been that prolific. He scored just 15 league goals in two Serie A seasons with Juventus, and was arguably being carried by superior players during his second, one season spell with Real Madrid. Certainly, it would be hard to argue that the player is a worthy replacement for his predecessor, Diego Costa.

Realistically, Lukaku looks the more likely of the pair to recover from his slump. The player has an excellent track record in the English top tier, and when his manager inevitably gets the chop, he’ll flourish under a new boss. As for Morata, unless he radically changes his mindset, he destined to become yet another Blues striker to flop –