?Resurgent Brighton welcome Chelsea to the Amex Stadium in the Premier League this weekend, looking for a fifth home victory of the campaign.

Seagulls boss Chris Hughton, who recently marked his 60th birthday, has seen his side lose just once at home all season – a 2-1 defeat at the hands of ?Tottenham back in ?September.

Meanwhile, Maurizio Sarri’s ?Chelsea eased through to the Europa League round of 32 on Thursday night, finishing their group campaign with a 2-2 ?draw at Vidi amid a hectic schedule that sees them play four games in ten days. The Blues ended Manchester City’s ?16 game unbeaten league run last time out to blow the title race wide open.

This weekend’s fixture is one of several ahead the Christmas period, which can often be season defining in teams’ respective league ambitions.

Hughton will be ?boosted by the return of winger Alireza Jahanbakhsh after the Iranian missed over a month with a hamstring injury. However, defender Shane Duffy will serve the second game of the three match suspension picked up in their win ?over ?Crystal Palace. Having made wholesale changes in Hungary, Sarri is expected to give starts to several players rested. One of those, ?Eden Hazard, is set to feature after his instrumental display against the current Premier League champions.

Forward ?Alvaro Morata is likely to miss out after ?sustaining a knee injury, with ?Olivier Giroud set to replace the Spaniard after scoring the equaliser at Vidi.

This will be the third ever Premier League encounter between the sides, the two teams crossing paths on just 10 occasions in all competitions – with Chelsea winning eight of those, compared to Brighton’s solitary win and a draw. The Blues dismantled their opponents in January’s corresponding fixture – Hazard ?netting a brace on the way to a 4-0 win.

Typically strong on home soil, Brighton boast the seventh best home record in the division – picking up 14 points from seven games. Hughton’s side are just three wins from equalling their tally for last campaign, as they look to improve on their eventual 15th place finish. 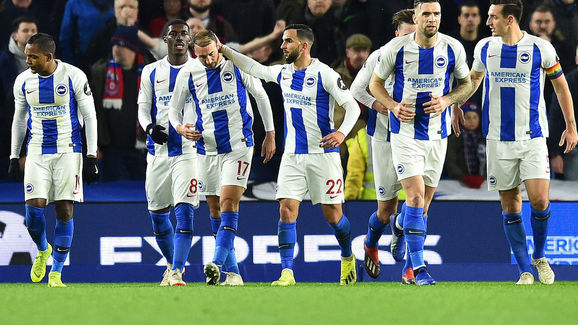 Despite strong defensive performances, their form has been in debt to their all time top flight record goalscorer Glenn Murray. In his second stint, the evergreen 35-year-old has continued last term’s formidable form, netting eight in 16 outings so far, with seven of those coming on the south coast.

Meanwhile, Chelsea have suffered a slight dip in form in recent weeks, despite their impressive win over City. Away defeats to Spurs and ??Wolves have raised questions ahead of Sunday’s clash, as they seek a first win on the road in three. Currently level with ?Arsenal in fourth on 34 points, three of their next four games see them play three bottom half teams, ?Watford, ?Southampton and Crystal Palace – as they pursue an unlikely title push.

Both sides have match winners in Murray and Hazard, whose contribution to their sides’ respective causes have been integral in recent campaigns.

With 15 goals between them this season, they’ll look to stamp their authority on what should be a much tighter affair than last season’s thumping. Albion’s home record speaks for itself, but their opponents come in high spirits after rectifying recent away losses – Sarri’s side may have enough to brush aside Hughton’s outfit.