Chelsea ran out comfortable 3-0 winners over Championship side Sheffield Wednesday to progress to the fifth round of the FA Cup.

A first-half penalty from Willian gave the hosts the lead heading into the break, before a stunning Callum Hudson-Odoi strike and another from Willian wrapped up an easy night’s work for Maurizio Sarri’s side.

After a comfortable opening 20 minutes for the home side, it was ?Sheffield Wednesday that were awarded a penalty when Joey Pelupessy was fouled by Ethan Ampadu as he went to shoot, with referee Andre Marriner deeming there to be sufficient contact to give a spot-kick. However, after a VAR referral, the decision was overturned much to the frustration of the Owls players.

Their frustration was compounded just two minutes later as the Blues were given a penalty of their own. ?Cesar Azpilicueta was caught late by ex-?Chelsea player Sam Hutchinson just inside the box, with VAR supporting Marriner’s view on this occasion. ?Willian stepped-up to cooly send Kieran Westwood the wrong way and give Maurizio Sarri’s side a slender lead.

The Blues effectively put the tie to bed just after the hour mark when a sweeping cross field ball from Andreas Christensen found Hudson-Odoi one on one with his defender. The youngster produced a lovely piece of skill to turn inside his man and fire past Westwood in the Wednesday goal, a deserved 2-0 lead for the hosts.

If there was any doubt, Chelsea added a third with just seven minutes remaining as Willian netted his second of the evening. A neat one-two with ?Olivier Giroud on the edge of the box presented the Brazilian with the chance to shoot, curling the ball beautifully into the far corner in off the post.

All eyes were on two Chelsea players this evening, one recently joining and one possibly playing his last game for the Blues. ?Gonzalo Higuain had a steady debut, without being spectacular, showing a number of nice touches and some good movement to get in-behind the Wednesday defence, something that had been lacking in previous weeks. 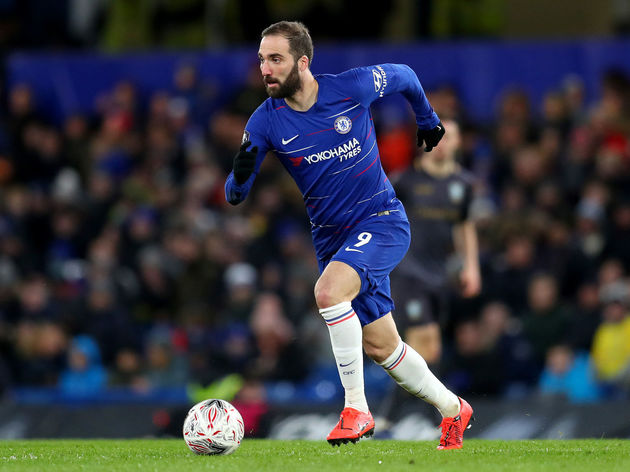 But it was Hudson-Odoi that stole the show, after reportedly handing in a transfer request to force through a move to ?Bayern Munich, his inclusion in the starting lineup surprised many. However, he didn’t disappoint after scoring a sublime second goal to remind the Stamford Bridge faithful what they will potentially be missing out on.

STAR MAN – Despite a bit of magic from Hudson-Odoi, it was Willian that claim a deserved man-of-the-match award after netting his first brace of the season. His second in particular was a lovely finish to cap his best performance of the season.

Willian is different gravy. Controlled the game from start to finish

WORST PLAYER – ?Ross Barkley didn’t have his most memorable game for the Blues as he lacked creativity in the middle of the park and lost possession a number of times on a frustrating evening for the Englishman.

What does Barkley actually offer to this team?

Sitting 17th in the Championship, it was always going to be difficult for the Owls to get a result against the current holders of the competition. Despite offering very little going forward, they can take pride in their defensive efforts as they maintained their shape effectively to frustrate the Premier League side. It could have all been so different had their first-half penalty not been overturned by VAR. If they had taken the lead, the whole complexion of the tie would have changed.

However, it wasn’t meant to be and Wednesday must now prepare for the rest of their season with Steve Bruce set to take charge next week.

After progressing through the Carabao Cup and FA Cup this week, Chelsea return to ?Premier League action on Wednesday when they travel to take on Eddie Howe’s ?Bournemouth at the Vitality Stadium.

Wednesday will next play on Saturday when they host bottom-placed ?Ipswich in a vital Championship clash for both sides.