?An image which appears to reveal Chelsea’s new home kit for the 2019/20 season has emerged on social media – and it is set to divide opinion among Blues fans.

Maurizio Sarri has endured a testing debut campaign at Stamford Bridge, but his side remain on course to secure a top four finish in the Premier League and have advanced to the semi finals of the Europa League.

The Italian may yet inspire ?Chelsea to success during his first term in charge, but attentions are already beginning to turn to next season. Via ?Breathe Chelsea, a popular Blues fan page, an image has emerged which shows ?Eden Hazard sporting what is likely next season’s home strip.

The Belgian’s inclusion is arguably the main headline of the shot, given that he appears increasingly likely to be on his way to ?Real Madrid in the summer, but the 28-year-old appears alongside teammates Cesar Azpilicueta and Ethan Ampadu in the shot.

Hazard’s presence in the shot is likely to draw further commentary, as the Belgian stands between two stars at very different stages of their Chelsea careers – Azpilicueta the seasoned leader, and Ampadu the young prodigy seeking to establish himself among the senior ranks. 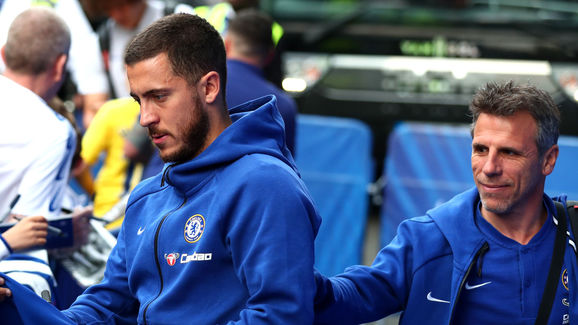 The kit, manufactured by Nike, features a unique fragmented pattern, ingrained in Chelsea’s classic royal blue home colours, along with a V-neck which breaks away from their current rounded neck design.

Yokohama Tyres continues to feature prominently on the design as the club’s main shirt sponsor, as well as Hyundai as the accompanying sleeve sponsor.

Aside from Hazard’s presence, though, it is the unusual choice of an eye-catching pattern which disrupts the usually clear canvas that is likely to provoke most debate among Chelsea fans.

Before the apparent new strip comes into play, however, Sarri’s side are set to take on Manchester United in a huge clash in the race for the top four in the Premier League on Sunday.