?England will have an opportunity to reach their first final since 1966 when they face the Netherlands in the Nations League on Thursday evening in

Champions League final on LiverpoolTottenham in Madrid – a match in which six of the current squad played a part in.

So assuming Southgate will be resting all of those involved in the weekend’s disappointing clash, let’s take a look at who may benefit from one of those available spots. Jordan Pickford (GK) –? Didn’t have the greatest season last year for Everton, but his World Cup heroics, ability with the ball at his feet, and lack of real alternatives means he’ll be England’s number one for a while yet.

Kyle Walker (RB) – Defensively suspect at times, but his lightening pace can bail out his defenders at any point, as well as help the attack with his trademark overlapping runs. Kieran Trippier’s dropping and Trent Alexander-Arnold’s 90 minutes in Liverpool’s win means the City right back can claim that spot as his own.

John Stones (CB) – Only made 24 Premier League appearances, which he can’t have been happy with, but Stones is probably still England’s best centre-half, and might even be a decent shout to captain the side against the Dutch.

Harry Maguire (CB) – There’s a reason Maguire has been linked with a huge move away from Leicester this summer. His performances, confidence on the ball and sheer strength at the heart of the defence make him a valuable cog in the Southgate machine.

Ben Chilwell (LB) – Another Foxes defender linked with a move away from the King Power, Chilwell has made the England left-back spot his own following some fantastic performances for his country since the World Cup. A real threat going forward and a solid defensive option. 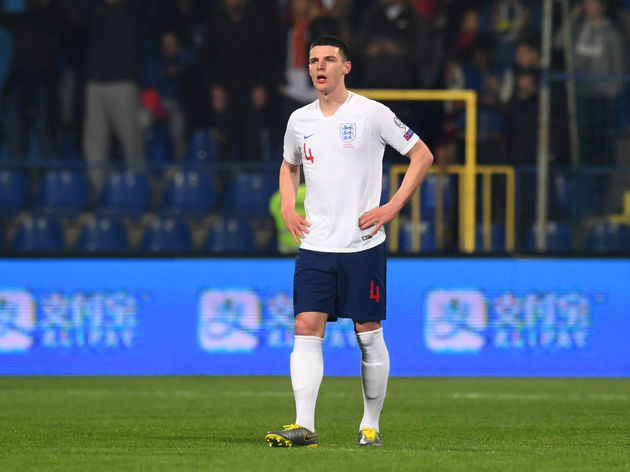 Declan Rice (CDM) – The 20-year-old’s decision to represent the Three Lions rather than Ireland was a fantastic boost for Southgate’s side, having had a sensational breakout season at West Ham

Jesse Lingard (CM) – His recent form should be a great concern to his club and country, but his talent at going forward and linking the play between midfield and attack has been a useful tool in the past. Will have to work extra hard to keep the brilliant Frenkie de Jong quiet.

Ross Barkley (CM) – Came on during Chelsea’s Europa League victory over Arsenal in Baku last Wednesday, but should be able to play 90 minutes here against an energetic Holland side. With the likes of Harry Winks, Jordan Henderson, Ruben Loftus-Cheek and Phil Foden all pushing for a starting place, Barkley needs to take this opportunity. Jadon Sancho (RW) – Has been an absolute sensation at Borussia Dortmund since his arrival and will be desperate to get off the mark for his country and make the right-wing spot his own. 12 goals and 17 assists in 34 Bundesliga appearances and plenty of pace and trickery tells you need to know about the hugely exiting 19-year-old.

Marcus Rashford (ST) – With Harry Kane almost certainly not fit, this is a huge opportunity for the Man Utd forward, who needs to improve his record of six goals in 31 caps. Will have his work cut out for him against Matthijs de Ligt and Virgil van Dijk.

Raheem Sterling (LW) –? Was deservedly named the Football Writers’ Player of the Year and was a catalyst for City’s incredible title win. His England form has dramatically improved since last summer, having scored six goals in his previous four games, including two in that historic win in Spain, and a hat-trick against the Czech Republic.