England have reached this stage of the competition for the second successive tournament after finishing third in 2015, but must now beat the holders and FIFA’s number one ranked team in the world if they are to improve on that incredible result from four years ago. 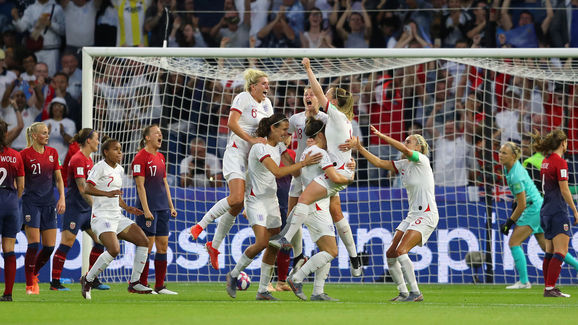 “These are the moments you want to be in as a player. I think some would say, ‘are you nervous?’ because they know it’s a big game. But, no, I’m super excited,” Bright told 90min’s Ben Haines.

“I want to get out there on the biggest stage in women’s football, in football in general. And playing against arguably the best team, they are. To be the best you’ve got to beat the best. So, game on.”

With a chance to get to the World Cup final, this is the single biggest game in the history of the England women national football team to date. But the squad is still relaxed after manager Phil Neville has worked tirelessly to create a positive atmosphere and winning mentality.

“I think that’s the main message that Phil gets across, a happy person is a great player,” Bright added. If you’re not happy, you’re not going to play well.

“For him, I think he knows that these experiences don’t come around too often. You never know if you’re going to go to another World Cup. That’s just reality. So he’s like, ‘just enjoy every single minute and play with a smile on your face’.”

As far as Bright is concerned, the World Cup has ‘100% and more’ lived up to expectation.

“It’s hard to believe that we’re going to be in a semi-final. It doesn’t quite feel [like] it because it’s so chilled and calm, and we’re in such a great place as a squad,” the 25-year-old said.

England’s relaxed atmosphere has been a feature of the tournament and has lasted. Prior to facing Argentina in the group stage last month, Fran Kirby told 90min, “You have to approach it with calmness, you can’t be fully tense all the time, because it does break down eventually and it drains your energy if you constantly have that adrenaline.”