When I started writing this, the pinned tweet on Chelsea’s official Twitter account contained a picture of Michy Batshuayi pouring water on the head of Danny Drinkwater, baptising him with life-affirming liquid, or something.

A quick look down the rest of the timeline showed the midfielder’s face in seven of the last 16 media posts, including a starring role in the three-year anniversary video for World Cup winner and Ballon d’Or nominee N’Golo Kante, in which he is the only midfielder chosen to talk about the Frenchman’s merits.

Training has intensified but spirits are high in the Chelsea camp! ? #CFCinJapan

He’s similarly present on the club’s Instagram feed. So, what are Chelsea trying to tell us?

Well, it’s clear. We’re not gonna need to bring in the lads from David Fincher’s ‘Zodiac‘ to work this one out. The signs are all there. Danny. Drinkwater. Is. BACK.

That’s right, the Dannaissance is here. The Drinkwateresurgence. The Second Noel (his middle name is Noel apparently, that’s the joke, but you probably wouldn’t have checked that).

It’s not just increased social media showings wot dunnit, either. There’s actual, on-pitch football reasons, too! For example, the 29-year-old was one of just eleven men to start Frank Lampard’s first game in charge of the Blues. That’s hallowed stuff. That was his first appearance in a Chelsea shirt since last August’s Community Shield loss to Manchester City, having been frozen out by Maurizio Sarri throughout the 2018/19 season. And, ironically enough, his last appearance before that had been against the same opponents in that ignominious (but not quite 6-0 embarrassing), pedestrian, uncompetitive 1-0 loss under Antonio Conte in March 2018.

And, in that ignominious, pedestrian, uncompetitive 1-0 loss to the Citizens, Drinkwater had been the only player in Chelsea blue worthy of praise. No, seriously, if I ever had the time/desire/skill to get into the YouTube highlights reel world, then that would be my first ‘out there’ choice. That would be the USP provider, and what a USP it would provide.

Because, in that game, Danny Drinkwater became Dañi Beberagua. Or Daniele Boirel’eau. He was classy. He was – Jesus Christ, am I actually going to say this? – Cesc Fabregas-esque. Hidden inside one of the worst games I’ve ever seen as Blues fan, was a miraculously conceived midfield masterclass.

Well, that might be stretching it. But it was a good, solid, fine performance. Akin to the one he put in against Liverpool a couple of months previously. You know, the one where the dearly departed Eden Hazard absolutely ROASTED him in the aftermath. 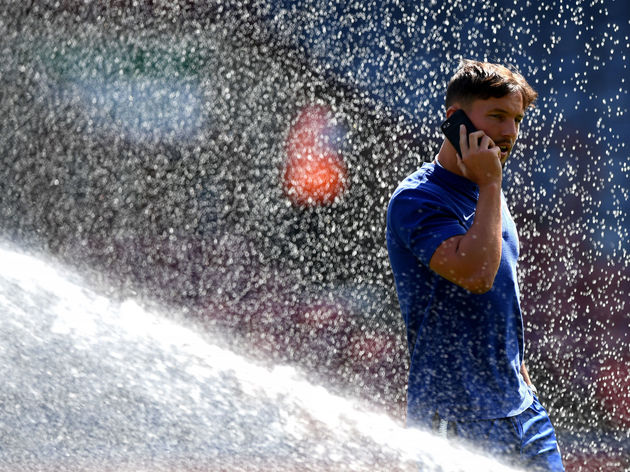 Speaking following the 1-1 draw at Anfield – the game where Willian scored that outrageously underappreciated chip which people said wasn’t on purpose for some reason – Hazard explained: “We changed the system, ?Danny Drinkwater was on the pitch and then we were a bit more defensive. The only player around me was Alvaro Morata, so if we wanted to win we had to do something together, just me and him.”

And, perhaps unsurprisingly for a man simultaneously named ‘Drinkwater’ and bought for £40m, that’s not the only cutting words he’s been on the receiving end of at Stamford Bridge.

There was, of course, the time that Maurizio Sarri ended him as an entity at Chelsea, with the immortal words: “He knows very well he has never played because in my opinion he is not suitable to my system, to my way of playing.

“I spoke with him in August, when the market was still open. I said to him he should look for something different. In my opinion, he doesn’t play. And I said to him the reasons, my reasons.”

And, to be fair, you could see how the ‘artistry’ of Danny could go missing in Sarri’s 4-3-3. But that was then, and this is now. This is Frank Lampard’s world we’re living in, and in Frank Lampard’s world there are 4-2-3-1 opportunities (not 4,231 opportunities, that’s too many) in which the Englishman could be deployed in a two-man midfield alongside his pal N’Golo, akin to those 4-4-2 days that the man, myth, legend thrived in under Claudio Ranieri.

No, he was never worth £40m. No, he’s not a ‘modern’ player, he hasn’t got the industry. Yes, you’re right, the only reason he stayed was because he was on £100k a week and no one else in their right mind would be willing to cough that up. And, yes, his only notable outing in the last year has come in a vehicle, while under the, err, ‘influence’. Drinkwater will [not] Drink water, apparently.

But, he did stay, didn’t he? He didn’t kick up a fuss. In fact, he seems to be one of the most popular players in the dressing room. And, there’s no reason why he can’t chip in now and again with that infamous passing acumen, a la – ah sh*t, here we go again – Fabregas in 2016/17.

I mean, just look at the supreme influence he had as a supersub in this pre-season friendly against Kawasaki Frontale…

Huh. Maybe not then. Oh well. Back to the drawing board, I guess.