?Chelsea manager Frank Lampard has insisted that striker Tammy Abraham deserved a chance to impress in the senior side, regardless of their transfer ban.

The Blues were hit with a two-window ban for breaching rules relating to the signing of young players, meaning they were unable to bring in a new striker. As a result, Lampard was tasked with turning to the club’s academy and vast number of loan players for the answer.

In Abraham, he certainly found that answer. The 21-year-old has fired seven goals in five games, and he has undoubtedly been one of the major success stories of Lampard’s young reign.

Speaking after Abraham netted a stunning hat-trick in a 5-2 win over ?Wolverhampton Wanderers (via ?The Mirror), Lampard confessed that he has always believed in the young striker, insisting that the ‘time was right’ for Abraham to get the chance which he thoroughly deserved.

Lampard faced Abraham on a number of occasions last season during his time in charge of ?Derby County. On loan in the ?Championship with ?Aston Villa, the youngster fired 25 goals in 37 appearances – all whilst ?Chelsea’s senior strikers were struggling to impress.

?Alvaro Morata is gone and ?Gonzalo Higuain’s loan was not extended, so Chelsea were left with ?Olivier Giroud and ?Michy Batshuayi, who have both struggled to impress with the Blues in the ?Premier League.

Fortunately, Abraham has stepped up to the plate. Now wearing the number nine shirt at Stamford Bridge, he currently sits atop the Premier League scoring charts, and there have been plenty of calls for him to feature in Gareth Southgate’s England squad.

Lampard was asked whether he felt Abraham deserved a call-up to the Three Lions, but he stated that he did not want to step on Southgate’s toes. However, he did confess that Abraham is ‘in the bracket’ for an opportunity as a result of his impressive form. 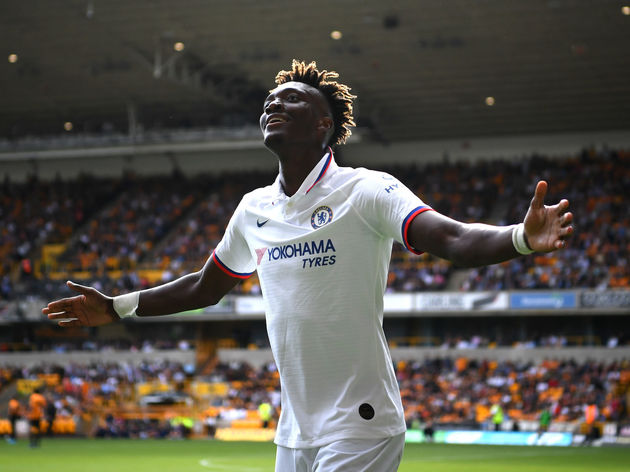 If Southgate wants him, he may have to act soon as Nigeria are looking to convince Abraham to commit to them. Abraham recently ?refused to rule out the possibility of representing the Super Eagles, insisting that he would wait to see which offer came first.