Chelsea face Arsenal on Tuesday night, with both teams in the midst of some decidedly mixed form. Nevertheless, this London derby should be no less hotly anticipated.

Frank Lampard will have had to pick his side up quickly from a disappointing 1-0 loss to Newcastle and move swiftly on to preparing for the visit of the Gunners. Isaac Hayden’s 94th-minute winner will have been a bitter pill to swallow for Lampard but he would have been comforted by the fact Manchester United (yet again) failed to close the gap in the race for the top four.

The Blues are still fourth in the ?Premier League, occupying the last ?Champions League place, five points ahead of their closest rivals United whilst Tuesday’s opponents Arsenal sit 10 points adrift.

In a bid to put even more breathing space between them and the chasing pack, ?Chelsea will look for a repeat of the battling performance that saw them come from behind to beat ?Arsenal 2-1 less than a month ago.

Here’s how Chelsea might shape up ahead of the clash. Kepa Arrizabalaga (GK) – The world’s most expensive goalkeeper was arguably at fault for the only goal of the game in his side’s 1-0 loss at ?Newcastle, with many under the impression that Hayden’s stoppage-time header was a soft one to concede. The

Cesar Azpilicueta (RB) – Chelsea’s skipper will most likely revert to right-back to cover for Reece James who picked up a knock in the match against the Toon. Azplicueta may well be in for a tough evening having to square off with the vibrant Gabriel Martinelli. The young Gunners forward will be full of confidence following his goal against ?Sheffield United.

Antonio Rüdiger (CB) – Lampard’s most senior centre-back will be happy to see Pierre-Emerick Aubameyang’s name missing from the Gunners teamsheet, with the Gabon forward still suspended. However, Arsenal have more than enough to trouble Chelsea and Rüdiger will need to be at his commanding best.

Andreas Christensen (CB) – The centre-half didn’t do much wrong in Blues’ game at St James’ Park but he would have been gutted to concede so late. He fared very well against the physical Joelinton, winning an impressive 88.9% of the aerial battles, he shared with the towering striker. Christensen will need a similarly domineering performance against Arsenal’s Alexandre Lacazette.

Emerson Palmieri (LB) – With Azpilicueta switching flanks, Lampard will surely call on Emerson to fill the void on the left. Out on the flank, he will go up against Arsenal’s pace merchant Nicolas Pépé and Emerson’s defensive attributes could well be given a rigorous test on Tuesday night. 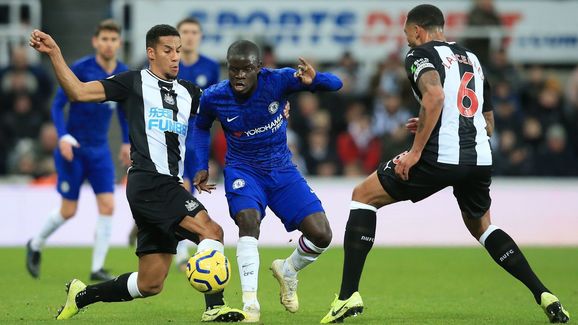 Ngolo Kanté (CM) – Having recovered from a hamstring injury, which ruled him out of the 3-0 home win over Burnley, Kanté gave another tireless performance at St James’ Park. Though ultimately on on the losing side, Kanté was a standout performer as Chelsea took the lion’s share of possession.

Jorginho (CM) – Alongside Kanté in the engine room, Jorginho also put in a commendable shift against the Magpies and was tidy in possession. The Italian will be tussling with Arsenal’s bullish Lucas Torreira for midfield supremacy in this encounter, in one of the game’s key battles.

Mateo Kova?i? (CM) – The Croatian may be preferred to Mason Mount in Chelsea’s middle three and will have a point to prove if he does indeed earn a start. Mount was largely on the fringes against Newcastle so this could be the perfect chance for Kova?i? to stake a claim to boss Lampard. Callum Hudson-Odoi (RW) – A criticism of Hudson-Odoi’s display at Newcastle was his lack of quality in the final third, a problem he will be looking to address against Arsenal. He will be eyeing the tantalising opportunity to twist inexperienced Gunners left-back Bukayo Sako in knots on Tuesday evening.

Tammy Abraham (ST) – The England striker was guilty of missing several chances for Chelsea in the Newcastle defeat and will be hoping to make amends against the Gunners. At times he found himself isolated against Newcastle so will be hoping for greater help from his supporting wide men in this one. Abraham will be quietly confident though, he was Chelsea’s matchwinner at the Emirates.

Willian (LW) – So often Chelsea’s inspiration in recent seasons, the Brazilian was unable to save the Blues with his trademark Samba magic on Sunday. But, he will be fired up for this one and relishing the chance to unsettle a nervy backline with his pace and trickery. In particular, he will be licking his lips at the prospect of going head to head with makeshift Arsenal right-back Ainsley Maitland-Niles.