When the team news emerged ahead of Chelsea’s 2-2 draw against Leicester on Saturday, there were several pointed changes made to Frank Lampard’s starting lineup.

The much-maligned Kepa Arrizabalaga, and apparently Barcelona-bound Willian were dropped to the bench. In their place came in Willy Caballero, making his first Premier League start of the season, and Pedro, who had played just six minutes of league football since the end of November.

Perhaps Lampard was willing to give his out-of-favour players one last chance. Perhaps it was a statement made to acknowledge towards Chelsea’s current lack of quality in the final third and their failure to address such an issue in the January transfer window.

Whatever Lampard’s motives, there was one man who, yet again, failed to make the squad. The forgotten Frenchman and World Cup champion Olivier Giroud.

Lampard has suggested Batshuayi is not at the required level to lead his Chelsea line. If this is what he thinks of the Belgian, Chelsea’s manager must have even greater reservations over ?Giroud, who finds himself ever-further away from the first-team picture. The 33-year-old hasn’t played a single minute of first-team football for over two months.

No wonder Giroud was so eager to secure a move away from West London during the January window. Moves to? Inter and Lazio failed to come to fruition, whilst a late ?move across town to top-four rivals Tottenham also broke down. Chelsea were willing to let him go, granted they could sign a replacement. Giroud had no issue with the prospect of joining Chelsea’s, and former club Arsenal’s, arch-rivals Spurs. For him, all that mattered was the guarantee of regular, top-flight minutes ahead of the European Championship this summer.

However, Giroud remains on Chelsea’s books, yet his short-term future looks bleak. Lampard’s hard-line, consistent approach with his squad selections means Giroud is unlikely to get any minutes without an injury crisis striking.

In this scenario, club executives have shown Chelsea are unwilling to strengthen a rival without ensuring they are covered themselves. Giroud, whist maintaining his exemplary professionalism, is a victim who may end up suffering a significant heartbreak come the summer.

For the 33-year-old, the Euros might be his last chance saloon to compete at the highest level. Didier Deschamps, who has often looked past the Frenchman’s inconsistent club form, and shortage of competitive minutes, will surely recognise the risk of bringing an ageing Giroud lacking match-fitness to the Euros as his starting striker. 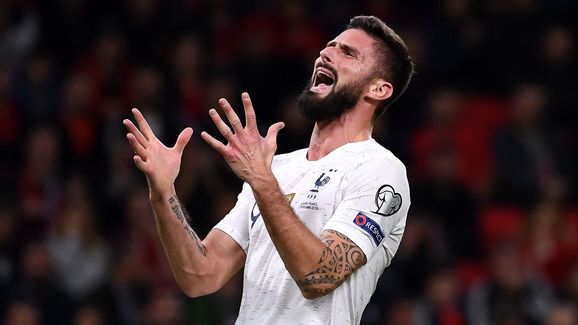 For Giroud, the writing has been on the wall for some time. Last season, he managed just seven Premier League starts. His impact was restricted to the Europa League, where he reminded his club, and country that he still had ‘it’.

He netted 11 times throughout Chelsea’s successful Europa League journey, including a goal, and a brace of assists against former-club Arsenal in the final.

Instead, Giroud is stuck in a worrying limbo. He has learned that he too is no longer needed at Chelsea. At 33, Frank Lampard has underlined that, under his futuristic, youth-centred direction, Giroud is no longer a viable option.

So, without a look-in at club level, Olivier Giroud, scorer of 78 Premier League goals, remains desperate to remind Deschamps he still has what it takes to perform at Europe’s highest level. Time will tell whether he will have the chance to do so for his country at the European Championships come June.