?Another Chelsea game, another afternoon sat on the bench for the world’s most expensive goalkeeper.

When Kepa Arrizabalaga was left out of the Blues’ squad for their game against Leicester at the beginning of the month, it was assumed by many to be a temporary measure –  an act of discipline by a young manager trying to show that no one is undroppable.

Frank Lampard received plaudits for his decision as well, even if his follically challenged replacement – 38-year-old Willy Caballero – was culpable for the Foxes’ second goal… 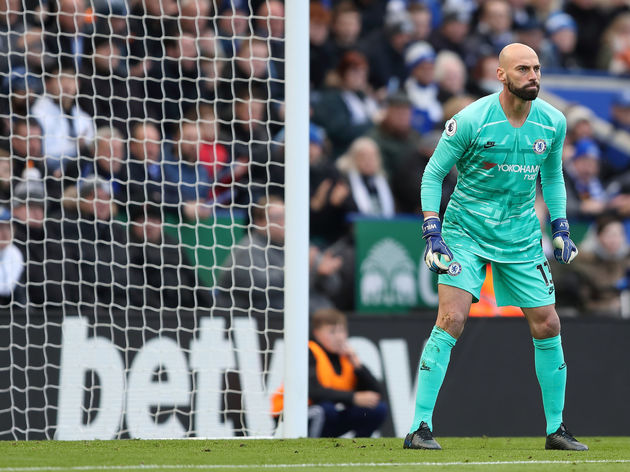 Alarm bells began ringing over Kepa’s long-term future when he wasn’t restored to the starting lineup for the Blues’ next fixture against ?Manchester United.

Though there was little that Caballero could have done about either of the Red Devils’ goals in a 2-0 defeat, question marks remained over why the club were not supporting their record signing through a challenging patch of form.

He admittedly performed better in games against ?Tottenham and ?Bayern, however the veteran’s display in Chelsea’s 2-2 draw against Bournemouth this afternoon simply must mark the end of Kepa’s exile.

With the Blues 1-0 ahead in a tight contest, the Cherries whipped in a corner which was met by the head of Jefferson Lerma. The Colombian’s effort was powerful, but the Argentine’s failure to keep it out after getting a hand there is exactly the sort of mistake that Kepa was dropped for.

Willy Caballero has saved just 53.3% shots he has faced in the Premier League this season, the joint-lowest among all keepers with 4+ PL apps this season (also Claudio Bravo).

This plea for the Spaniard to return to the Chelsea starting 11 is no knee-jerk reaction to a single mistake though. An analysis of Caballero’s time as the Blues’ number one suggests that he has not improved the side – at all.

Big Willy’s save percentage of 0.500 is worse than the 0.536 that Kepa has averaged this season. Caballero has also conceded more goals per 90 minutes.

Though this latter metric cannot be solely attributed to the performances of either goalkeeper, it would not be a stretch to argue that Caballero’s presence has had a negative effect on his defenders’ confidence.

So why is it that Lampard persists to play him? The logic of sharpening up the squad by rotating is sound, but when this tactic is losing you points at a vital stage of the season, it’s time to go back to the drawing board.

Kepa represents a significant investment on Chelsea’s part and it seems unlikely that any other club would pay close to the £72m fee that the Blues spent on the former Athletic Club man.

This, combined with the fact that his absurdly long contract expires in 2025, suggests that the club should attempt to rebuild their relationship with the stopper and back him during this rough patch, even if he is to be sold in a cut-price deal in the summer.

Sorry Willy. It was fun while it lasted but it’s time to go.