Chelsea haven’t always had the glamorous ?names billions of oil-soaked pounds bring you, and even after Roman Abramovich started splashing the cash, more than one or two acquisitions looked like anything other than money well spent.

So, let’s take a look at some of those players the Stamford Bridge faithful don’t have a banner for, or still chant about, those names that Chelsea would sooner like to forget. Ross Turnbull (GK): Turnbull didn’t start his ?Chelsea career with his best foot forward after having a howler on his debut for the reserves, conceding four without reply. And it didn’t get much better after that.

Khalid Boulahrouz ?digit on the back of the shirt

Winston Bogarde (CB): The Dutchman certainly boasts a trophy cabinet not in keeping with a terrible player, but his 12 appearances for the Blues came while he was on a

Baba Rahman (LB): The Ghana international is, incredibly, still technically a Chelsea player. Before five consecutive years out on loan, Rahman’s one campaign at Stamford Bridge came in the disastrous 2015/16 season as the club didn’t spend a single week above ninth place. 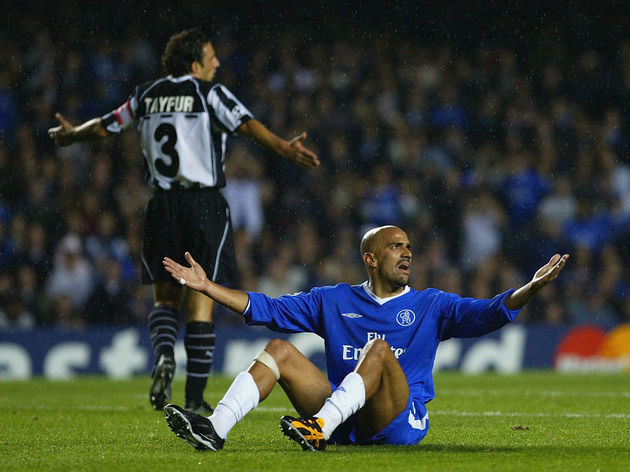 Juan Sebastián Verón (CM): La Brujita or ‘the little witch’, wasn’t great at Manchester United, even worse at Chelsea, but won ?Serie A with Lazio and is a club icon back in Argentina with Estudiantes. It’s almost as if Verón needed the game to be played at walking pace to work his magic.

Steve Sidwell (CM): Remembering Sidwell’s time in west London provides the same emotional response as watching a Jason Statham movie – both were as disappointing as they were forgetful. Another non-striker to wear the no.9 too, despicable. Fernando Torres (ST): Whether it was the £50m fee, the injury he was nursing from the previous April or his change in haircut, Torres’ form dropped off a proverbial cliff when he moved to west London. After lighting up the division with ?Liverpool and scoring roughly three times every five games, in a Chelsea shirt Torres managed less than one in five.

Chris Sutton (ST): After a £10m move in 1999, Sutton scored one solitary goal in 28 league games, giving him the worst minutes per goal ratio of any forward to have played more than a smattering (500) minutes for the club.

Robert Fleck (ST): After severing his ties with Norwich, the club he’d made his name at, to push through a move to Stamford Bridge, you can forgive Fleck for thinking it wasn’t really necessary. The striker scored as many league goals in his two seasons at Chelsea as he had for the Canaries in the domestic cups the year before he moved – three.